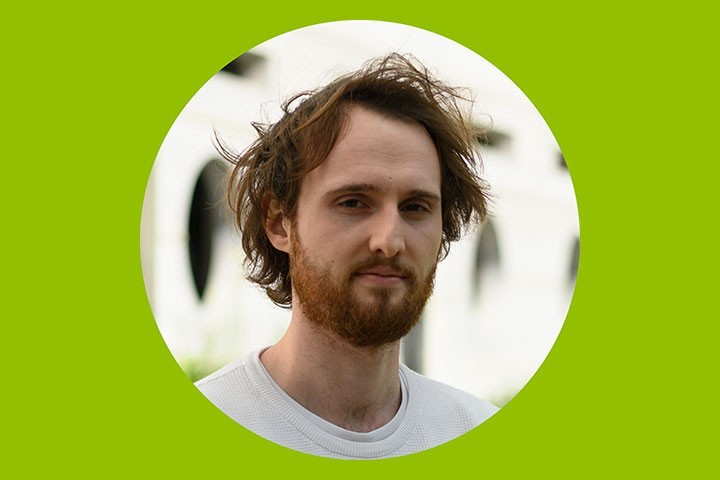 This is the final stretch for Roman Walle (NutriNeuro – Team Capuron / Layé) who will defend his thesis in a few months. While he was immersed in his latest experiments, we were able to interrupt him for a short while to ask him a few questions.

You are preparing your thesis on the functional dissociation of subpopulations of dopaminoceptive neurons of the ventral striatum. What are the stakes of this research?

This project was born during my master 2 internship au NutriNeuro, carried out in the team of Dr Pierre Trifilieff, who is now my thesis supervisor. The classical model concerning the two major dopaminoceptive sub-populations of the ventral striatum was that the D1-MSNs had a facilitating role, while the D2-MSNs played rather the role of “brake” on the motivational component of directed behaviors. Several contradictory studies came out at that time (Soares-Cunha et al., 2016; Natsubori et al., 2017; Gallo et al., 2018).

We therefore decided to join the debate. The results I obtained are rather in line with the classical model concerning the control of motivational processes, while showing that things are obviously more complex. In particular, we have shown that these 2 populations of MSNs, in addition to their involvement in the modulation of the motivational component, play a central and opposite role in the control of food intake: the activity of D1-MSNs has a satietogenic effect while that of D2-MSNs is rather orexigenic. And more recently we have also shown that these effects on food intake are accompanied by a modulation of “physical activity”.

These results are particularly interesting in the context of eating disorders such as obesity and anorexia, which are characterized by a disturbance of the reward system but also by a decrease, or on the contrary an increase in physical activity in the case of obesity and anorexia respectively. As these pathologies are often partly associated with striatum dysfunction, our data make it possible to propose potential pathophysiological mechanisms underlying these disorders.

You have benefited from an extension grant by the LabEx BRAIN. What did this allow you to do?

These studies are based on long behavioural tasks in order to apprehend the motivational component, but also on the genesis of transgenic and double-transgenic mice, which is sometimes complicated. And I must say that I have not always been lucky with my animal reproductions. Moreover, the above-mentioned effects on food intake and activity were obtained towards the end of my thesis. The fellowship allowed me to compensate for this invested time and to push a little further our studies in view of a more important publication. Not to mention the Covid crisis, which was critical to the progress of research in general.

You are at the end of your studies, how about we go back over your career path?

I began my university course by integrating the first year of medicine at the Joseph Fourier University (UJF) of Grenoble (now Grenoble Alpes University). But the teaching method didn’t suit me, I needed something more didactic like integrating problems to be solved! That’s why I went into biology to do research. It wasn’t until my 3rd year that I became passionate about neuroscience under the influence of my teachers and in particular the study of neuropsychiatric diseases and dopaminergic circuits.

And why did you choose Bordeaux for your PhD?

I had already heard of Bordeaux as a very dynamic centre in neuroscience but it was mainly following an internship in Cambridge with Dr. David Belin who was himself a former student of the University of Bordeaux that I decided to study there. And honnestly the transition to the Bordeaux climate was also attractive!

What advice would you give to neuroscience students?

I would tell Master students that, if they are determined to do a PhD, they will find a lab! They should not  choose one by default but prioritize the topic and the agreement with the host team. That makes the difference!