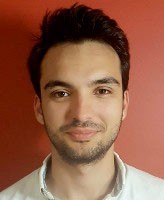 The hippocampus is a key structure for learning and memory. The function of this neuronal circuit is based on complex interactions between excitatory glutamatergic pyramidal cells and various types of inhibitory GABAergic interneurons. The precise roles fullfiled by interneuron subtypes is still unclear because it is challenging to study in vivo the inhibitory function of specific interneurons. Alterations of the synaptic interactions between pyramidal cells and interneurons in the hippocampus also underlie neurological pathologies such as epilepsy, neurodevelopmental diseases such as autism, or neurodegenerative diseases such as Alzheimer’s disease. Among the different types of interneurons, those that express parvalbumin (PV) and project to pyramidal cell bodies (perisomatic inhibition) are particularly efficient in blocking action potential generation in their target cells. PV interneurons therefore play a central role in neuronal coding (by controlling which cell can fire or not) but also in the balance between global excitation and inhibition within the circuit, prevention runaway excitation between interconnected pyramidal cells and the generation of epileptic seizure. Functional perisomatic inhibition directly depends on Cl- electrochemical gradient, or the interaction between membrane potential and Cl- distribution across the membrane of the target neuron. However, these parameters change continuously during neuronal activity, and it has been shown that the Cl- gradient can be reversed, resulting in paradoxically excitatory GABAergic transmission. This phenomenon, which contributes to the physiological maturation of neuronal circuits during early development, is also considered as a major source of neuronal circuit dysfunction in various pathologies such as epilepsy, autism or schizophrenia. This field of research is therefore clinically relevant, and the research for drugs restoring a physiological Cl- gradient is very active. However, a direct assessment of the excitatory GABA hypothesis has been hindered by the technical difficulty of probing endogenous GABAergic synaptic function in vivo, and contradictory data in the literature call for a direct evaluation. During my PhD, using electrophysiological, opto- and pharmaco-genetic techniques, I have contributed to develop a new and sophisticated methodological approach to evaluate the perisomatic GABAergic transmission in the hippocampus, respecting the complexity of spontaneous neuronal activity dynamics in vivo. I have studied the functional role of perisomatic inhibition from PV interneurons in the adult hippocampal circuit, in physiological conditions and in two models of epileptic mice in which I was able to detect an excitatory GABAergic transmission in vivo. However, excitatory GABA was unlikely to participate in epileptogenesis because it was expressed only during the period of post-ictal silence after acute seizures, or in a potentially negligible minority of pyramidal cells one week post-status epilepticus during the latent period that precedes the emergence of chronic epilepsy, a stage during which I also demonstrated that the majority of CA3 pyramidal neurons were no longer under perisomatic inhibitory control. In addition to contribute to a better understanding of epileptogenesis, this approach constitutes an invaluable tool to quantify the actual in vivo efficacy of drugs designed to modulate Cl- homeostasis and restore physiological GABAergic inhibition, thereby meeting high clinical and therapeutical expectations.