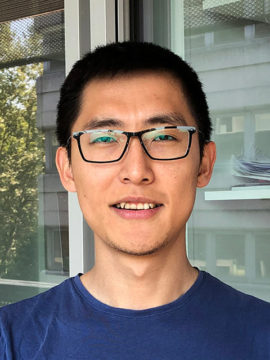 Azheimer’s disease (AD) is a neurodegenerative disease that is linked in its early stage to synaptic dysfunction and loss of synapses. Numerous clinical data obtained from patients but also experimental data obtained on mouse models of AD show that there is a sexual dimorphism evidenced by a higher amyloid plaque deposition and an early onset of memory disorders in female mice compared to male mice.

In this work, we investigated the molecular and cellular alterations of AD as well as the associated cognitive deficits in female APP/PS1 mice, a double transgenic murine model of AD. In parallel we studied the alterations of hippocampal synaptic transmission and plasticity in the stratum moleculare, a layer in the vicinity of the dentate gyrus (DG) which specifically displayed a high density of amyloid plaques.  We showed the presence of numerous amyloid plaques in the DG in a larger amount in 6 month old females compared to age-matched males as well as a strong activation of astrocyte and microglia glial cells. These molecular and cellular alterations are accompanied by hippocampo-dependent memory deficits (contextual fear conditioning and novel object place recognition task) from the age of 4 months in females whereas males have no deficit until the age of 12 months.  We then studied the electrical properties of DG neurons, the transmission and the plasticity of the perforant pathway – DG neurons (PP-DG synapse) in the 6 month old female mouse by comparing the two genotypes APP/PS1 vs wild type (WT).

In both genotypes, DG neurons displayed two distinct populations in terms of input resistance and action potential discharge pattern (APs). In contrast, the resting membrane potential, the input resistance, the activation threshold and the amplitude PAs were not modified in APP/PS1 vs WT. The frequency of discharge of APs was increased in APP/PS1 without shift of E-S curve which relates EPSP-slopes to the associated AP firing probability.

Basal transmission at the PP-DG synapse was altered in the APP/PS1 mouse vs WT without alterations in the AMPA/NMDA ratio or the AMPA rectification index. The frequency of the NMDA miniature currents was increased in APP/PS1 DG neurons vs WT which suggests the unmasking of silent synapses that express almost no AMPA receptors. The long term potentiation (LTP) of population spike amplitude was decreased by approximately 50% in APP/PS1 mice. The decrease in LTP observed in APP/PS1 was partly related to alterations in the intrinsic properties of DG neurons as evidenced by LTP-induced shifts of E-S curves, which reflects an increased excitability for APP/PS1 mice.

In conclusion our results show a prominent sexual dimorphism with much earlier amyloid plaque deposition, neuroinflammatory glial activation in female vs male APP/PS1. In parallel, significant deficits in hippocampal-dependent memory are observed as well as alterations of synaptic transmission and plasticity at the PP-DG synapse, a key synapse of the integration of mnesic informations originated from the entorhinal cortex.