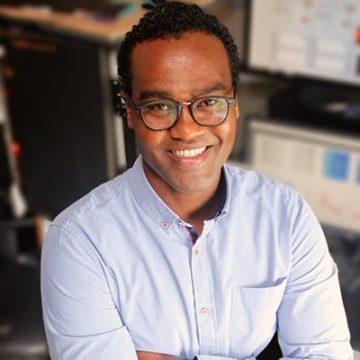 Dopamine (DA) activity is critical for learning and motivational functions, but details of how DA mediates flexible behaviors continues to be refined. The most intensely debated aspect of DA function involves *what* decision signals are relayed, and *how* these messages are communicated to post synaptic cells. One dominant theory asserts that DA encodes reward prediction error (RPE) signals that are uniformly broadcast to recipient regions. Indeed, the anatomy of DA axon arbors and studies on spiking of midbrain DA cells support this theory. Contrary to this notion, however, many studies demonstrate mismatches in the temporal pattern of DA release across striatal sub-regions. It is now increasingly evident that DA signaling is spatially and temporally heterogeneous, yet we do not understand the organizational principles or computational functions of heterogeneous DA decision signals.

I performed functional imaging of VTA axons in the dorsal striatum. DAT-cre mice received midbrain infusion of GCAMP6, and implanted with imaging cannula or GRIN lenses for optical access into the striatum. After recovery from surgery, we imaged large-scale (~8-9 mm area, using 1-photon microscopy) or fine scale (~10s of μms, using 2-photon microscopy) activity of DA terminals in the striatum during performance of tone-guided reward expectation tasks.

I will report a novel set of spatio-temporal trajectories of DA axons across the dorsal striatum (DS). The spontaneous activity of DA axons is organized into irregular, but spatially and temporally continuous waves that extend across 8-9 mm2 of mouse striatum. Further, reward immediately resynchronized activity into directional waves. Specifically, in pavlovian tone-reward association task, DA waves initiate in lateral DS and propagate medially, terminating in the anatomical equivalent of head of the caudate. By contrast, reward delivery in instrumental tasks that require mice to walk for distant rewards produce waves that initiated in the medial DS and propagate laterally. These results indicating that opponent spatiotemporal trajectories of DA reward responses communicate decision-signals for flexible behaviors. I will provide initial computational formulations of how pre-reward DA ramps and subsequent waves interact to provide non-scalar RPE signals in striatal domains modelled as mixture of experts that specialize in different computations.

What we do ? We use a series of techniques to study how neural circuits are composed and organized, how neuromodulatory neurons interact with other neural systems, and how the dysfunction of specific elements within a circuit lead to aberrant activity across systems.