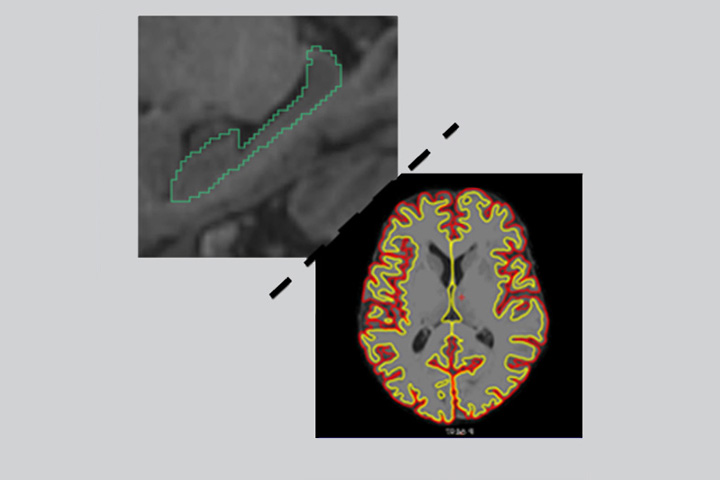 Recent works have suggested that the categorization of brain atrophy subtypes through structural MRI with typical (i.e. hippocampal and neocortical association regions), hippocampal sparing or limbic predominant patterns of atrophy can identify biologically and clinically meaningful presentations of Alzheimer Disease (AD). This categorization has indeed been proposed as a surrogate marker for the distribution of tauopathy in AD brains, based on comparison of MRI data with Tau-PET or post-mortem pathology. Because previous studies were mainly based on pathophysiological hypotheses, samples were restricted to patients with amyloid-positive biomarkers, patients with amnestic mild cognitive impairment (MCI) and/or patients with dementia and AD clinical syndrome. Thus, whether brain atrophy subtypes can characterize and predict different etiologies of neurodegenerative diseases in a population reflecting the wide variety of cognitive presentations of patients seen in memory clinics was as yet unknown.

In the present collaborative work between the Institut des Maladies Neurodégénératives (CNRS UMR 5293) et the Bordeaux Population Health Center (Inserm UMR 1219), Vincent Planche et al. stepped back from the usual theoretical pathophysiological model, which constrains them to study a marker of tauopathy (brain atrophy subtypes) only in the context of amyloidopathy (i.e. among amyloid-positive patients). Instead, they postulated there may be  unobserved latent categories of disease that also drive observed atrophy subtypes, with different cognitive consequences. They studied brain atrophy subtypes in a large and unselected sample of patients who consulted a network of French memory clinics (the MEMENTO cohort, n=2083 outpatients, 4-years follow-up), presenting with subjective cognitive complaint or mild cognitive impairment, without a priori knowledge regarding their amyloid status or clinical presentation. They found that typical/diffuse pattern of atrophy was associated with faster cognitive decline and the highest risk of developing dementia and AD over time, both in the whole analytic sample and in amyloid-positive participants. Hippocampal sparing and limbic predominant atrophy were also associated with incident dementia, with faster cognitive decline in the limbic predominant atrophy group. Lewy body dementia was more frequent in the hippocampal sparing and minimal/no atrophy groups. They concluded that brain atrophy subtypes based on structural MRI could be widely used as a biomarker to provide valuable information in clinical practice and helpful screening criteria in clinical trials to identify subgroups of fast progressors.