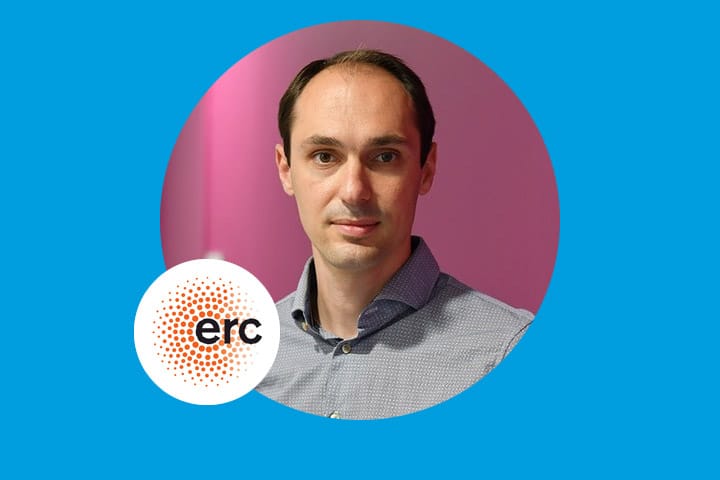 The European Research Council (ERC) announced on Monday 10 January 2022 the list of researchers who have been awarded ERC Starting Grants. These competitive grants provide early-career researchers with a budget of approximately 1.5 million euros for a period of 5 years to conduct their proposed research project and lead their own team. Fabien Wagner, a researcher at the University of Bordeaux within the Institute of Neurodegenerative Diseases (IMN – CNRS and University of Bordeaux), who leads the “Neuromodulation and Neuroprosthetics” team, is one of the laureates with his project entitled MEMOPROSTHETICS. His team works on the development of neuroprostheses aimed at restoring learning and memory capacities after brain injury or neurodegenerative diseases such as Alzheimer’s.

Established in 2007, the European Research Council awards individual research grants each year to talented early-career scientists (two to seven years after completing their PhD) to start their own projects, form their own teams and pursue their best ideas. Following the first call for proposals under the EU’s new R&I programme, Horizon Europe, €619 million will be invested in pathfinder projects by 397 researchers, including Fabien Wagner.

The goal of Fabien Wagner’s current research is to develop a neuroprosthesis of the neural networks underlying memory processes, in order to improve learning and memory in neurological disorders. This is a basic science research project still at a pre-clinical level, but with potential therapeutic applications in brain injury or neurodegenerative diseases such as Alzheimer’s disease.

In Alzheimer’s disease for example, it is difficult to create new memories because of a deficit in memory encoding capabilities. This encoding is done electrically because the neurons communicate with each other via nerve impulses which are in fact electrical signals. Within the framework of MEMOPROSTHETICS, Fabien Wagner expects to implant several electrodes in different brain regions in order to carry out electrical stimulations inspired by the way the brain naturally works, and thus mitigate neuronal and cognitive deficits.

The researcher will start working with his team to develop a first prototype of a multi-site brain implant and algorithms to control neurostimulation protocols in real-time, with the long-term prospect of being able to apply these approaches to patients.

This stimulation protocol is envisioned to work in a closed-loop fashion, i.e. almost autonomously. The neuroprosthesis will record and analyse the brain’s neurophysiological signals thanks to several dozens of electrodes, and will then carry out targeted electrical stimulations modulated accordingly, i.e. with stimulation frequencies and amplitudes adjusted in a precise and personalized manner. Similarly to the way a pacemaker affects heart rhythms, but applied to very complex brain circuits.

What is different and innovative compared to other studies is that this approach will target several different brain areas (it is multi-site) and will be based on real-time control. Three areas of the brain will be implanted: the hippocampus, the main area underlying memory processes, the entorhinal cortex, also involved in memory mechanisms and Alzheimer’s disease, and the prefrontal cortex, which is the substrate of higher cognitive functions.

A demanding European call for projects

Fabien Wagner was supported by the service « Montage et Suivi de Projets » (SMSP – Project Set-up and Follow-up Service) and the University of Bordeaux’s Europe Unit in applying for this ERC. In this context, he received support from a consulting firm and was also able to attend training courses provided by the Institute of Engineering Sciences and Systems (INSIS) and the Aquitaine regional delegation of the CNRS in order to draft the project and prepare for the interview in front of the European Research Council, which required several months of preparation.

His CV in a few words

Fabien Wagner began his studies in Bordeaux in maths-physics preparatory classes at the Lycée Montaigne before entering the Ecole Polytechnique in Paris. At this point, the engineering student began to diversify his horizons and became interested in modelling brain functions via computational neuroscience. Interested by the potential clinical applications and societal impact, he made a transition to neuroscience during his PhD thesis at Brown University (USA) working on Brain-Machine Interfaces, optogenetic stimulation and epilepsy, followed by a post-doc at the Ecole Polytechnique Fédérale de Lausanne (EFFL) on electrical stimulation of the spinal cord, this time to restore motor skills in paralysed subjects. Fabien Wagner then obtained a young team leader chair financed by the Nouvelle-Aquitaine region and the University of Bordeaux, within the Bordeaux Neurocampus research department, and thus joined the Institute of Neurodegenerative Diseases (IMN – CNRS and University of Bordeaux) in the spring of 2020 to create his own team.