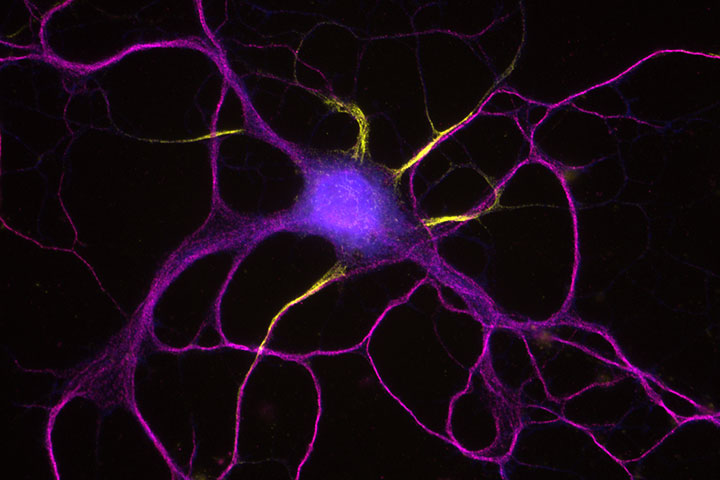 Over the years, our group has been exploring the many functions of Polarity and Planar Cell Polarity (PCP) proteins via cytoskeleton modulation on neurons. Members of these protein families play roles in important pathways that determine neural development and polarization of tissues. In this study, we found that Prickle2 (Pk2, OMIM 60850) is a neuronal polarity determinant and a new component of the axonal initial segment (AIS), participating in its early assembly and stabilization via direct binding to AnkG and microtubule bundling.

Many neurodevelopmental disorders (NDDs) are complex and multi-syndromic. Pathogenic protein variants associated with NDDs will affect the neuron, circuits and the entire brain, requiring multi-scale analysis to fully understand the underlying pathology. Our study shows that we should also consider the various compartments and sub-compartment of the neuron to fully understand the cellular consequences of NDDs.

Neurons are polarized cells with two defined compartments that differ in morphology and define neuronal function: the axonal and the somatodendritic domains. This asymmetry or polarity is crucial for proper neuronal signaling and communication. These neuronal compartments can be further divided into sub‐compartments that can be defined based on their morphology, molecular composition and/or function, such as the synaptic spines on dendrites, the presynaptic boutons in axon terminals, the proximal axon or AIS, and the distal axon.

Prickle 2, is a core PCP protein found initially at the synapse. Pathogenic variants in Prickle genes have been linked to NDDs such as spina bifida, autism spectrum disorders (ASD) and epilepsy. While defects in spines are believed to be at the roots of the pathologies, we unexpectedly found Pk2 at the AIS of neurons. The AIS not only coordinates the axo-dendritic polarity establishment and maintenance, it has its own plasticity that is an essential mechanism for tuning neuronal output and hence network coordination in response to changes in input.

We found Pk2 at very early developmental stages in the AIS suggesting that Pk2 may well be the first interactor of AnkyrinG-480 (AnkG), the AIS master organizer, helping AIS stabilization in the one neurite that will become the axon. The function of Pk2 in both the determination of the axon and the formation of the AIS is nicely illustrated when depleting Pk2 and creating a striking multiple axon phenotype with disrupted AIS(s). In addition, the axonal trafficking in these axon is affected (collaboration with Amelie Fréal, Vrije Universiteit, Amsterdam, Netherlands @FreAmeLie).

At least part of the deficits observed is due to the ability of Pk2 to potentiate a microtubule bundling activity of AnkG-480. But because the proteins interact via the ANK repeat of AnkG, common to all isoforms, they could also interact in spines.  The consequences are important as the gene for AnkG, ANK3, are a critical gene in ASD, schizophrenia, bipolar disorder, intellectual disability (ID) and epileptic encephalopathy, and could therefore impact both compartments.

In collaboration with Arne Battefeld, the team leader of the team Pathophysiology of neuron-oligodendrocyte interactions at IMN, we show that Pk2-depleted neurons have lower excitability and lack sodium channel clustering at the AIS, a phenotype reminiscent of AnkG loss in Purkinje neurons.

Our results show that the presence of the same protein in multiple compartments, engaging in different protein complexes and signaling pathways has important consequence in pathology. When the protein is defective, due to a pathogenic variant of the gene, different compartments may be affected, complicating specific therapeutical approaches. This concept is critically important for complex pathologies like NDDs that still have poorly defined neuronal molecular signatures.