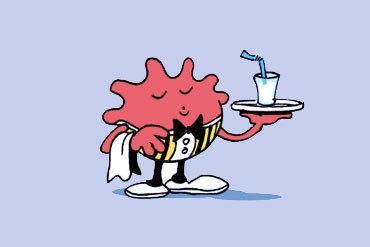 Even today, lactate is considered by many as a waste product, a “trash” metabolite, too often associated with the Warburg effect. In clinical practice, and more particularly in neurology, lactate is a marker of poor prognosis. However, it has been shown that lactate can be an excellent neuronal energetic substrate. After working for almost 20 years with the aim to demonstrate the existence and the major role of the lactate shuttle between astrocytes and neurons, scientists from the CRMSB of Bordeaux (UMR5536) have shown that lactate administration reduces brain damages linked to neonatal hypoxia-ischemia (neonate rat model). Surprisingly, glucose and pyruvate do not have a similar effect. After only three lactate injections (3, 24 and 48 hours after the hypoxia-ischemia episode), the behavioral tests carried out on these pups (from P8 to P45) show a recovery of the sensory-motor and cognitive functions tested. This opens up encouraging prospects for therapy for newborns who have suffered from hypoxia-ischemia at birth and for whom no pharmacological treatment can be currently proposed (hypoxia-ischemia in neonate is one of the first cause of neonatal mortality and disabilities).

The hypothesis proposes that lactate, administered after hypoxia-ischemia and therefore in reperfusion condition, would be used as a preferential energy substrate by neurons. Glucose would then be “saved” and metabolized in the pentose phosphate pathway (rather than via glycolysis), a very important metabolic pathway to counteract radical oxygen species (or ROS), which are very harmful to the cell. 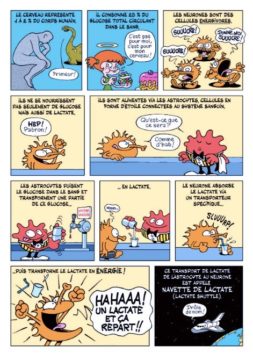 This work has been published on March the 24th in JCBFM (https://doi.org/10.1177/0271678X20908355), and has also been transposed and illustrated into original comic strips for the lay public, in collaboration with the artist Matyo (http://www.matyo.com/) with the financial support by the LabEx TRAIL.