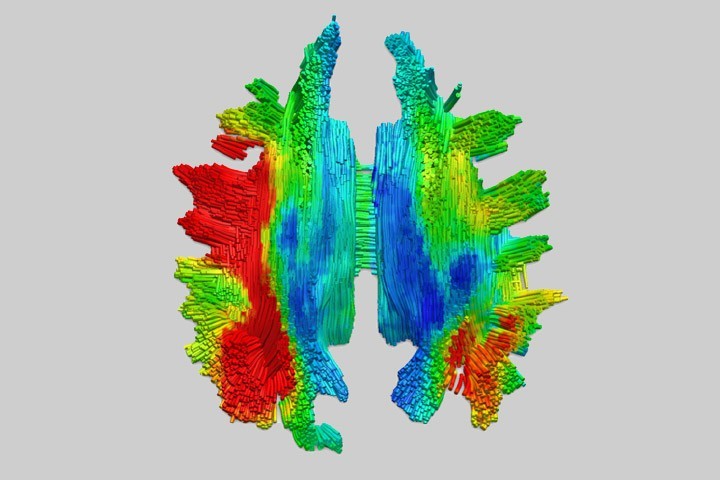 A collaborative work between a French CNRS research team led by Michel Thiebaut de Schotten and a British UCL team led by Parashkev Nachev has just produced the very first functional atlas of human cerebral white matter, mapping more than 500 brain functions. This is a major conceptual innovation in human neuroscience research that will allow the study of new brain functions on the basis of their connectivity. It could also be a valuable medical tool in identifying stroke injuries and the disruption of functional circuits they cause.

We commonly call gray matter the outer layer of the brain (or cerebral cortex) devoted to the most integrated cerebral functions, such as visuospatial, language or memory skills. The cerebral cortex is constituted of the cell bodies of neurons, giving it its eponymous colour. Just as good communication between individuals is essential for the functioning of a society, good communication between cortical regions is essential for brain function. In the brain, communication is enabled by tract-like extensions of neurons# — axons — which group together in bundles to connect the different brain regions together, some of which reaching a length over 20 cm. True communication channels, in connecting the functions of several brain regions, these white matter bundles allow the creation of new, more complex functions similarly to a group of letters that makes a full word with a specific meaning.

For a long time, research in human neuroscience has focused on the study of brain functions associated with cortical regions. Brain imaging techniques developed in the early 2000s, such as functional MRI for example, have made it possible to map brain functions (language, logic, memory, etc.) on the surface of the cortex. But we can clearly see the limits of this approach, which does not allow us to understand the relationships between different cortical regions involved in the same function. With the advent of new imaging techniques making it possible to model white matter tracts (for the past ten years or so), neuroscience is entering a new era where the anatomical support of brain functions is no longer considered only as a collection of regions on the surface of the brain, but as a network of interconnected nodes communicating with each other. This study, based on one of the largest collection of brain damaged by stroke (1333 patients) combined with the most comprehensive meta-analysis database in neuroimaging (Neurosynth) and the best current white matter mapping derived from the “Human Connectome 7T ”, has produced the first-ever functional white matter atlas, which alone maps more than 500 different functions in the brain. This is a major conceptual and epistemological advance in human neuroscience since cerebral functions are no longer defined a priori and sought only in the cerebral cortex, but they now emerge from the in-depth analysis of white matter networks conceived as functional territories defined by their connectivity. By placing itself at the interface of basic research and medical research, this atlas promises to be an essential tool for exploring new brain functions and their circuits as well as for identifying typical stroke lesions which interrupt the circuits of the brain. white matter for given functional activation networks