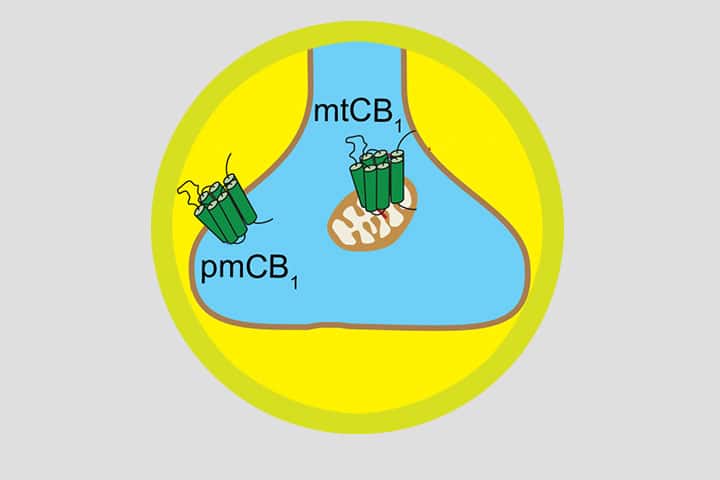 Cannabis is one of the most widely used drugs in the world and Δ9-tetrahydrocannabinol (THC), its main psychoactive compound, is the third most popular addictive substance for recreational use after ethanol and nicotine. Several U.S. states, as well as other countries around the world, recently legalized the recreational use of cannabis. In addition to recreational use, cannabis has also been used medicinally for thousands of years, particularly in pain management. However, its use is associated with several undesirable and even dangerous effects, including impaired motor coordination and catalepsy (abolition of voluntary muscle movement). These last effects, classically associated to antipsychotic drugs of first generation which act on the system of the ganglia of the base (BG), are considered to be the major cause of car accidents under the effect of cannabis.

The basal ganglia (BG) are a group of brain nuclei essential for controlling and coordinating motor activity, with the striatum being the central nucleus. Interestingly, the neurons of the striatum have the highest levels of cannabinoid type 1 (CB1) receptor expression in the brain. These neurons can be divided into 2 populations forming the (i) direct and (ii) indirect striatal pathways, discriminated by their target region, respectively the external Globus Pallidus and the reticulated Substance Noire. The latter circuit (i.e. striatonigral) constitutes a potential target explaining both beneficial and deleterious effects of THC due to its crucial role in the regulation of motor function and nociception. Neuronal CB1 receptors are mainly associated with the plasma membranes of axonal terminals, where they regulate synaptic transmission. However, previous studies from our group and other laboratories show that CB1 receptors are also present in intracellular compartments, notably associated with mitochondria influencing memory and sociability via the modulation of bioenergetic processes. The existence of different sub-cellular pools of CB1 receptors suggests that their activation by cannabinoids could lead to distinct effects within the same circuit. By combining genetic, pharmacological, biochemical, electrophysiological, imaging and behavioral approaches, we show that CB1 receptors of the direct striatal pathway are responsible for the multimodal action of THC, according to their subcellular distribution. Thus, by acting on different sub-cellular signaling pathways in the same neurons, we were able to dissociate the analgesic effect from the catalepsy induced by an acute injection of THC or other synthetic cannabinoids (see abstract and figure below).

This research work was directed by Giovanni Marsicano and Luigi Bellocchio, in the team “Endocannabinoids and Neuroadaptation” at the Neurocenter Magedie. For the success of this work the two researchers collaborated with Jerome Baufreton’s team, at the Institute of Neurodegenerative Diseases of Bordeaux and also abroad with the University of Bilbao in Spain and the University of Calgary in Canada.

These results are crucial for a better understanding of the mechanisms of action of cannabis and for the development of new therapeutic strategies based on its beneficial effects (e.g. analgesia) while avoiding its deleterious effects (e.g. catalepsy).

Recent advances in neuroscience have positioned brain circuits as key units in controlling behavior, implying that their positive or negative modulation necessarily leads to specific behavioral outcomes. However, emerging evidence suggests that the activation or inhibition of specific brain circuits can actually produce multimodal behavioral outcomes.

This study shows that activation of a receptor at different subcellular locations in the same neuronal circuit can determine distinct behaviors. Pharmacological activation of type 1 cannabinoid (CB1) receptors in the striatonigral circuit elicits both antinociception and catalepsy in mice. The decrease in nociception depends on the activation of plasma membrane-residing CB1 receptors (pmCB1), leading to the inhibition of cytosolic PKA activity and substance P release. By contrast, mitochondrial-associated CB1 receptors (mtCB1) located at the same terminals mediate cannabinoid-induced catalepsy through the decrease in intra-mitochondrial PKA-dependent cellular respiration and synaptic transmission. Thus, subcellular-specific CB1 receptor signaling within striatonigral circuits determines multimodal control of behavior.