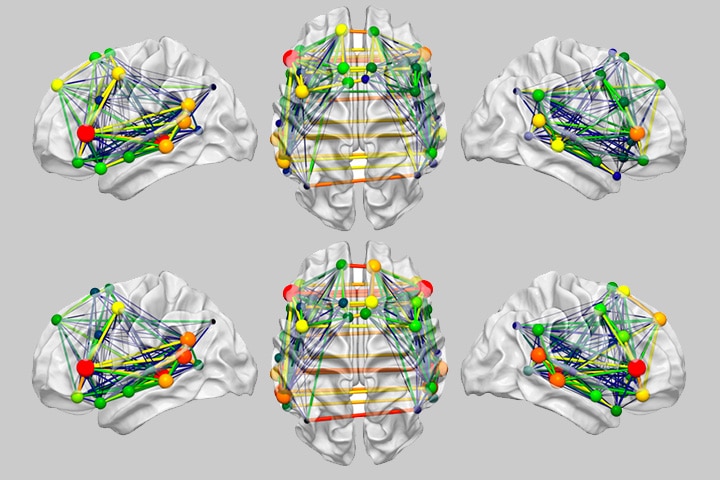 Description of an atypical brain organization for language

The cerebral organization of language, initially described by nineteenth-century neurologists and typically located in the left hemisphere, has not finished revealing all its secrets. Researchers from the Neurofunctional Imaging Group (GIN, CEA / DRF / Institut Frédéric Joliot, CNRS, and University of Bordeaux) have indeed described an “atypical” language organization in some individuals for whom it is the right hemisphere that is heavily involved in language tasks. But these atypical individuals do not have a brain organization for language strictly mirroring that of “typical” individuals. Indeed, the strong involvement of the right hemisphere in “atypicals” is associated with a strengthening at rest of the inter-hemispheric connectivity of the left and right language networks. Published in the journal eLife *, this work will be an important point of reference for future studies of basic and clinical research on language.

In the vast majority of humans, the left cerebral hemisphere hosts the language processing networks that make it possible to listen, speak or read. However, for some “atypical” individuals, mostly left-handed, language seems to involve the right cerebral hemisphere. This rare phenomenon has never been studied in depth. However, in order to understand the genetic and environmental determinants of language, it is particularly instructive to describe the brain organization of language in these atypical people.

To meet this challenge, GIN researchers have studied more specifically the network in charge of sentence processing because it brings into play the syntactic and semantic aspects of the language in an integrated manner. In order to recruit a sufficient number of “atypical” individuals, the researchers constructed a sample of 287 participants made up of more than 50% left-handed people. They then combined the use of two functional MRI techniques. Using activating functional MRI, they measured the asymmetries of brain activations during the production, listening and reading of sentences. With functional “at rest” MRI, they recorded spontaneous changes in brain activity (i.e. without task) in order to measure functional connectivity between regions of the sentence network.

Two types of brain language organization have been identified using a classification algorithm that simultaneously takes into account asymmetries of activations during language tasks, asymmetries of connectivity measures at rest, and connectivity strength. at rest between the two hemispheres.

As expected, 90% of the participants presented a so-called “typical” organization with strong asymmetries in favor of the left hemisphere for the 3 language tasks as well as for the integration of information at rest within the language network.

In 10% of the participants, or around 30 individuals, the algorithm developed by the researchers revealed a completely atypical brain organization of language. It is characterized first of all by strong straight asymmetries during language tasks. Then, at rest, the atypical organization is distinguished by a bilateral integration of information as well as by a stronger functional inter-hemispheric connectivity. At the anatomical level, the corpus callosum, this thick network of nerve fibers that connects the two cerebral hemispheres, is also larger in atypical participants, which would promote the stronger inter-hemispherical communication observed at the functional level.