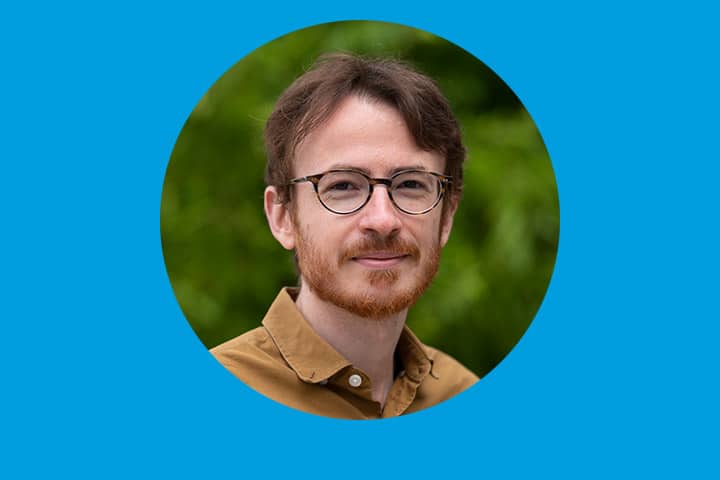 Michel Engeln is a new CNRS researcher at IMN. He joined Serge Ahmed’s team in January 2021

Bordeaux Neurocampus: This is actually a return to Bordeaux for you. Can you introduce yourself for those who don’t know you?

Michel Engeln: I have just returned from the United States. I did my post-doctorate at the University of Maryland in Baltimore during six and a half years, in the laboratory of Mary Kay LOBO. I got my position at the CNRS in September 2020, and I arrived in Bordeaux in January 2021.

In my work, I am interested in the molecular substrates of drug use, particularly cocaine. It is known that cocaine, and repeated drug use in general, will induce molecular changes across different populations of neurons, which are responsible for mechanisms such as neuronal plasticity.

In my research, rather than finding the addiction gene or the key molecule, I will try to understand the more global functions that are changed after drug use, for example the signaling pathway of a receptor or the expression of a transcription factor, and how it will regulate the expression of other genes, or how drug use affects the expression of certain molecules that modify the morphology of neurons.

During my post-doctorate, I targeted specific neuronal populations within the same brain structure, or precisely targeted a circuit, to see how the expression of certain genes is specifically changed in these neuronal subpopulations, in order to better understand the mechanisms linked to drug intake. For example, in the nucleus accumbens, there are neurons with dopamine D1 receptors and those with dopamine D2 receptors, which sometimes have opposite roles, sometimes complementary, so we used transgenic animals to specifically target these populations of neurons.

B.N.: You have just returned to IMN after more than 6 years in Baltimore, what did you get out of this experience?

E.N.: It was very stimulaing, I learned a lot of new things, especially molecular biology, which I didn’t see during my master’s degree and my thesis, because I have a degree in psychology and behavioural neuroscience. It took me some time to get into it, but I acquired this expertise so it was very interesting!

I also met colleagues, who are now friends, who are excellent scientists and with whom I was able to create a work dynamic, and I hope that we will continue to work together through collaborations.

In laboratories in the United States, there is usually only one full researcher (usually travelling a lot) and several doctoral and post-doctoral students, which pushes us to be quite autonomous and independent. With my colleagues, we worked together, we helped each other and we built projects, which was very interesting and which will be useful to me later.

B.N.: And so after Strasbourg, Bordeaux and Baltimore … Why did you choose to come back and work here?

E.N.: During my thesis at IMN, under the direction of Pierre-Olivier Fernagut, I could see that Bordeaux was a very active and interesting city for neuroscience. The laboratories have a great interest in addiction, motivation and aspects of reward in a somewhat historical way.

During my thesis, I was interested in addiction-like behaviours in Parkinson’s disease, where there are problems with dopamine, a very important molecule for reward. During this work, I collaborated with Serge Ahmed, and I really liked the type of experiments he was using and the way he was approaching addiction. So when I was thinking about coming back to France at the end of my post-doc, I knew that there were these laboratories and this environment in Bordeaux which is favourable. And Bordeaux is a beautiful city!

B.N.: You are part of the “Pathological Decision Making in Addiction” team led by Serge Ahmed at IMN. Can you explain what your research will consist of?

E.N.: I will combine what I have acquired in the past: behaviour and molecular biology, and I will be interested in the mechanisms and molecular changes linked to drugs, in certain populations of neurons or certain precise neuronal circuits, and with a behavioural aspect that will be a little more precise and complex than what I have been able to do in the past. For example, I will target projection neurons with retrograde viruses injected into the target structure to look at the expression of genes in these circuits or use viruses to manipulate the expression of these genes.

I would like to add to this the study inter-individual differences a small legacy from my thesis. Among cocaine users, only 15% develop an addiction and lose control of their drug intake. So we are going to try to find this in animal models and see what differences cocaine will cause in these individuals, and how cocaine will modify the reward circuits in them.

B.N.: What techniques will you use to answer these questions?

E.N.: I will use a lot of molecular biology, including RiboTag, which is an immunoprecipitation of ribosomes. I will tag the ribosomes of specific neurons. I can then immunoprecipitate these tagged ribosomes and filter the RNA that is attached to them. This will allow me to look at the expression of genes only in certain populations of neurons. I’m also going to use viral vectors (because I’m working with rats and it’s less common to have transgenic rats), cell-specific molecular techniques, RNA sequencing. All this in order to see in a general way how the expression of genes is changed and therefore what cellular function is changed, and then to target these particular cellular functions. And all this with a behavioural aspect in rats thanks to Serge Ahmed’s laboratory.