Skip to content
Bordeaux Neurocampus > For all > Interview – Marc Deffains 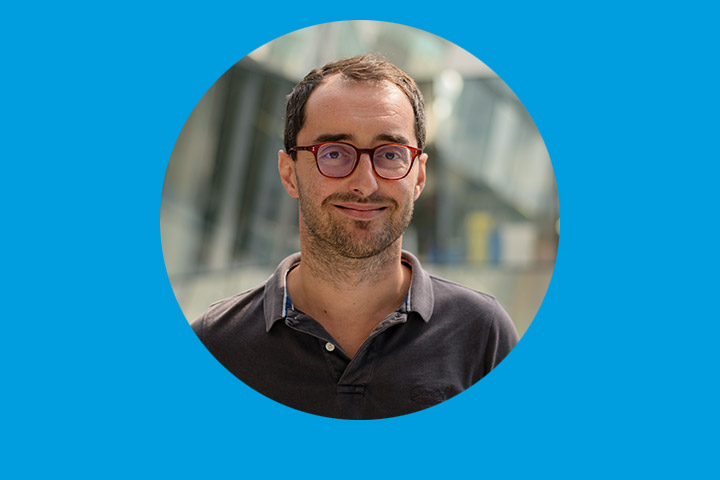 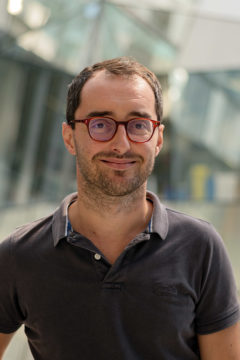 Marc Deffains is a researcher in the “Physiology and Physiopathology of Executive Functions” team at IMN. Interview.

Bordeaux Neurocampus: Last year you obtained a research position at the CNRS. What was your background before this step?

Marc Deffains: Looking back on my career, what I remember is that I have always tried to understand how the brain works and what guides our behavior. As soon as I got my Master 1 in physiology in Rennes, I studied neuroscience. Then, I went to Marseille to do my Master 2 and my thesis under the direction of Dr. Paul Apicella in the Laboratory of Cognitive Neuroscience, which I obtained in 2011. I studied the neural mechanisms underlying learning processes in non-human primates. I then joined Professor Hagai Bergman’s laboratory at the Hebrew University of Jerusalem, to deepen my knowledge of the functioning of the human brain using monkeys trained to perform different actions and more specifically I was interested in the brain dysfunctions that can be observed in patients with Parkinson’s disease or obsessive-compulsive disorders. Finally, after 6 years spent in Israel, I chose to return to Bordeaux in 2017 and apply for a permanent CNRS position at the IMN during the annual recruitment campaigns, which I got last year

What do you take away from the 6 years you spent in Israel?

In fact, I wanted to go and live in Israel long before the possibility of doing my post-doc there. It was a place that interested me, even though I had no particular attachment to this country. I wanted to discover this new culture and try to better understand this region of the world and this intractable conflict. During my post-doc, I had the chance to meet Professor Hagai Bergman who is one of the leaders in the field of physiology and pathophysiology of the basal ganglia. He contributed to the development of deep brain stimulation in Parkinson’s patients. He notably showed that lesioning the subthalamic nucleus could reduce the motor deficits characteristic of Parkinson’s disease. His research was done on non-human primates, so it is a common thread for me, and thanks to his supervision and leadership, I learned to master the recording techniques of the brain activity in the different structures of the basal ganglia, in awake monkey or suffering from Parkinson’s disease. In parallel, I learned signal processing techniques to study brain activity. These techniques are fundamental in my field of research because we collect a lot of data but we also need the right tools to be able to analyze them.

Finally, facing this different culture was very fruitful for me. It showed me that one could think differently and finally lead to unexpected things, which one did not expect at the beginning and which nevertheless brings a new light. In spite of my departure, I still have many collaborations that are very productive and that  I hope will continue in the future.

And so after Rennes, Marseille, Jerusalem… Why did you choose to work here?

After 6 years spent abroad, one inevitably develops certain attachments, but on the other hand, family, friends and one’s own culture may be missing. While thinking about where I could continue my research in France, I realized that there were only few places where this was possible: Paris, Marseille (where I had done my thesis) and Bordeaux. The world of research and especially of neuroscience is a very small world, and Thomas Boraud was one of the first post-docs of Professor Hagai Bergman in the early 2000s. The connection with IMN and Bordeaux Neurocampus was therefore quite obvious. We quickly developed a chemistry!

So here you are in the team of Thomas Boraud and Pierre Burbaud at the IMN. Can you tell us what your research involves?

In fact, I will study the neural mechanisms of decision making in the basal ganglia under normal conditions when monkeys have to make a choice and under pathological conditions when they suffer from Parkinson’s disease. The basal ganglia are a set of subcortical structures involved in decision-making and their dysfunctions contribute in the decision-making deficits observed in Parkinson’s patients. I therefore use the techniques I learned during my thesis and post-doc to understand the mechanisms of decision-making: I record neural activity in different brain regions when animals are engaged in a decision-making process and identify the dysfunctions and their consequences on their ability to make choices when they suffer from Parkinson’s disease.

Indeed, Parkinson’s disease is not only about motor symptoms such as tremors or difficulties to perform movements. Parkinson’s patients also suffer from cognitive disorders and in particular from difficulties in making decisions and abnormal behaviors in relation to risk (they can become risk-seeker or risk-averse).

So, I am still asking myself the same questions as before I started my studies: what guides our behavior? I am here to find part of the answer!

What are the stakes of research on non-human primates (a rather delicate subject as we know)?

As I said earlier, the use of the non-human primate in my career is a common thread and like a large majority of the society, I have very often questioned the appropriateness of its use. For this reason, for two years now, I have been co-supervising with Dr. Karine Massé (Lecturer, University of Bordeaux, Institute of Neurodegenerative Diseases) tutorial for undergraduate students on the appropriateness and necessity of the use of non-human primates in animal testing.

Today, issues related to animal welfare and the practice of ethical and responsible research are central to the concerns of researchers. Moreover, animal testing and especially the use of non-human primates is extremely well-regulated at both the national and European levels. There are clear regulations, frequent controls and sanctions in case of non-compliance. Moreover, the use of non-human primates in research is rare (compared to other animal species such as rodents) and is only possible in very specific cases when there are no alternative methods. Because of its proximity to humans, the non-human primate is an extremely valuable model that must be used responsibly and thoughtfully, but which undeniably allows major scientific and medical advances. Therefore, the stakes of non-human primate research can be summarized in one question: Are we ready to give up the scientific and medical advances that research on non-human primates brings to us?