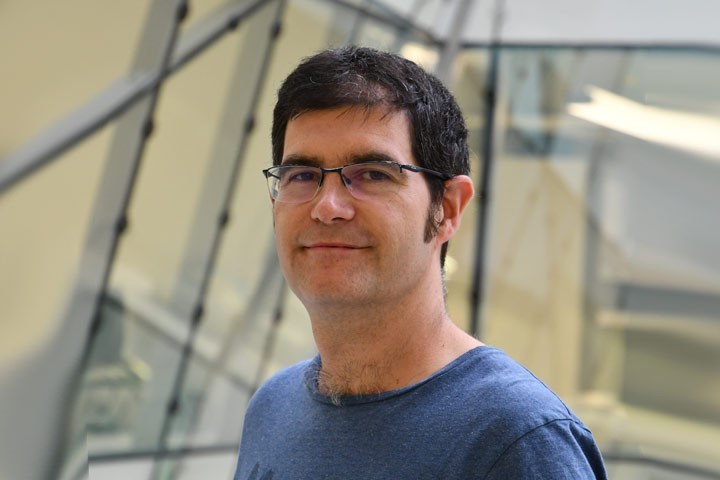 Bordeaux Neurocampus: Hello David, you’ve been a researcher for almost 10 years in IINS. Can you first remind us your career and profile?

David Perrais: Sure. I joined IINS for its creation in 2011, in the team of Daniel Choquet, to work on the endocytosis and recycling of post-synaptic receptors which are essential for synaptic transmission and plasticity. Before that, I was already in Bordeaux since 2002. I was in the team of Christophe Mulle, first as a post-doctoral fellow, and since 2005 as a CNRS researcher. In Christophe’s team, I have worked mainly on the pharmacology and biophysics of kainate-type glutamate receptors using patch-clamp electrophysiology and kinetic modelling. In parallel, I have developed live cell imaging techniques to study exocytosis and endocytosis, first in non-neuronal cell lines, then in neurons to address the questions I was later interested in. To go back further in time, I started to learn these imaging techniques during my first post-doc in the lab of Wolf Almers in Portland, Oregon, USA, back in 1999, after a PhD I have obtained on the activation of GABAA receptors during synaptic transmission in Gif-sur-Yvette (near Orsay) with Nicole Ropert.

BN: Can you explain us on which topic will your team work?

DP: Our goal in the team is to study the mechanisms regulating synapse function, focusing on membrane trafficking events in normal brain physiology or in the course of disease. We are interested mainly in the presynaptic element filled with synaptic vesicles fusing to release neurotransmitter molecules as well as the post-synaptic side where post-synaptic receptors are going through cycles of endocytosis and recycling, which is essential for synaptic transmission and plasticity. Finally, we are not only interested in canonical synapses, such as cortical glutamatergic synapses, but also in rare and much less understood synapse populations such as neuromodulatory dopamine synapses. To tackle these issues, we combine two types of expertise mastered by the two PIs of the team, myself and Etienne Herzog. I bring electrophysiology combined with the most advanced fluorescence imaging techniques to detect and characterize individual exocytosis and endocytosis events with pH sensitive fluorophores, while Etienne brings his method of purification of synaptosomes from adult animals with fluorescence activated synaptosome sorting (FASS) which enables powerful proteomics, transcriptomics and functional approaches. Altogether we aim at identifying new principles of organization in specific synapses and test their relevance for synaptic function in the normal and diseased brain.

BN: Your team gathers staff coming from several other teams, can you introduce them?

DP: With great pleasure. Three people “followed” me from Daniel’s team: May Bakr started her PhD in 2017 and is now in the process of writing her thesis, although she needs to finish some experiments, which might be complicated with the confinement. Lou Bouit was hired as an assistant engineer in 2017 on a project funded by Labex Brain, a collaboration with Emilie Pacary (Neurocentre Magendie). Silvia Sposini started to work with me as a post-doctoral fellow in 2018 and will hopefully continue to work for several years with me because she has just obtained a very good fellowship from Wellcome Trust. The team is really the brainchild of discussions with Etienne Herzog, a CNRS researcher who was in the team of Yann Humeau at IINS since 2012. Etienne was enthusiastic to start a team on membrane trafficking in synapses and we decided to join forces and present a project which was evaluated favorably, first by the internal IINS steering committee, then by an external scientific advisory board last January. The whole process took almost a year but it was very important to define clearly what we wanted to do as a team. Maria-Florencia Angelo worked as a research engineer for five years with Etienne, but unfortunately she stayed in our team only until March 2020, just to see the team officially created. Marlene Pfeffer, who worked with Etienne as a Master student in 2017, joined us as a design engineer in January, and hopefully will continue as a PhD student. Vincent Paget-Blanc should have started at the end of March as a post-doc but, because of the confinement, the start of his contract had to be postponed, hopefully not for too long! Finally, Julie Angibaud, a UB design engineer joined us in March from the team of Valentin Nägerl. She has a great expertise in slice culture and immunofluorescence and she is very eager to develop new technical expertise to tackle our projects. Overall, we are already 8 people (not counting two Master students), which is a very good number to develop a true “team spirit”.

BN: Last question: where can we meet your team?

DP: In the first floor of IINS, room 150. On the south side of the floor, you walk all the way to the “south-east” corner (towards the students’ lecture building and cafeteria). This is where we are most of the time, if not roaming the experimental rooms around, or the BIC or the FACSility, two platforms which we use a lot. Our office space is sunny and quiet; we are very lucky!