Implication of synaptic plasticity in spatial memory consolidation in mice

The acquisition and expression of goal-directed behaviors is of key to elaborate behavioral adaptation in a constantly changing environment. Since long, actually since its discovery in the 1970s, sustained forms of synaptic plasticity (SP) are thought to take a great part in this learning process. However, the causality link remains to be demonstrated and the question of SP involvement in the encoding or the consolidation of memory is still opened, as most of the behavioral tests used in combination with conventional synaptic plasticity blockers intermingle learning sessions and resting periods, that do not clearly allow separating between both memory steps. In our project, we used recently described AMPAR X-linkers to immobilize GluA2containing AMPA glutamate receptors to block long term synaptic plasticity in the dorsal hippocampus of mice submitted to a delayed spatial alternation task (DSA). In DSA task, animals have to run trials in a Y-maze and chose alternatively left and right ending arms in order to ﬁnd the food reward. Surprisingly, if mice could exhibit acquisition and restitution of goal-targeted behaviors, the process of memory consolidation was abolished in presence of the SP blocker. We then combined in vivo and in vitro electrophysiological studies to explore the relationship between hippocampal Sharp Wave Ripples (SPW-Rs) events and hippocampal synaptic plasticity. So far we put the evidence supporting the engagement of AMPAR mobility-dependent SP within the CA3 region into SPW-Rs mediated memory consolidation. Yet, our tool is not designed to specifically block the AMPAR mobility in a neuron type, so our results only concern the excitatory pyramidal neurons that are major in the hippocampus. Then the question about the implication of the interneurons in our results, is relevant. On that purpose, we developed (in collaboration with Daniel Choquet’s team) a transgenic mouseline KI GluA2-AP, that allows us to specifically block the AMPAR mobility at the interneurons. Once the physiology and validity of this new tool were checked, we were able to perform this specific blockade in hippocampal interneurons. However, we did not observe any default of synaptic plasticity. Which is not so surprising, as AMPARs that are expressed in interneurons are not composed of GluA2 sub-units. So, the aim of the team now, is to reproduce our experiments on a new transgenic mouseline KI GluA1-AP. It will allow a better understanding on the implication of interneurons in this synaptic plasticity responsible of spatial memory consolidation. And thereby, getting deeper in our knowledge of the link between SP and spatial memory.

The next generation of approaches to investigate the link between synaptic plasticity and learning
Le Penn et al.
Missense mutation of Fmr1 results in impaired AMPAR-mediated plasticity and socio-cognitive deficits in mice 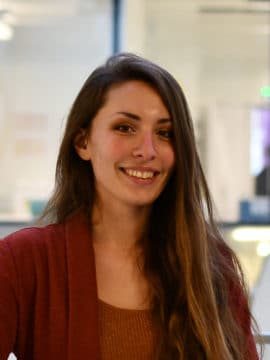