When in the presence of a threatening situation, mammals display a broad range of fear responses, including freezing, avoidance, autonomous responses, and analgesia. Indeed, following fear conditioning, a reduction of pain sensitivity has been observed, a phenomenon called fear-conditioned analgesia (FCA). It is defined as a reduction of pain sensitivity upon re-exposure to a cue previously paired with a noxious stimulus. Whereas the structures and mechanisms involved in pain behavior are well documented, little is known about the precise neuronal circuits mediating the emotional regulation of pain behavior. Among the structures involved in conditioned fear behavior, the periaqueductal grey matter (PAG) has been identified as a critical structure for the expression of several defensive reactions, including freezing. Interestingly, this brain region is also a fundamental structure in the ascending and descending pain pathways. Moreover, it has been shown that electrical stimulation of the ventrolateral PAG (vlPAG) induces strong analgesia, indicating that this structure can, in addition to freezing responses, modulate pain signals. Therefore, the vlPAG might be at the core of the emotional modulation of pain behavior. Here we used a combination of behavioral, anatomical, optogenetic, and electrophysiological approaches to show that somatostatin-expressing neurons in the ventrolateral periaqueductal gray matter (vlPAG SST cells) promotes antinociceptive responses during the presentation of conditioned stimuli predicting a noxious stimulus. Whereas the optogenetic inhibition of vlPAG SST cells promoted analgesia, their optogenetic activation reduced analgesia by potentiating pain responses in the spinal cord through a relay in the rostral ventromedial medulla (RVM). Together these results identify a brainstem circuit composed of vlPAG SST cells specifically projecting to the RVM and mediating FCA to regulate pain responses during threatful situations. 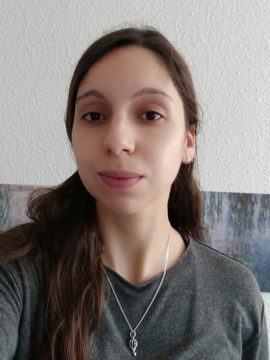