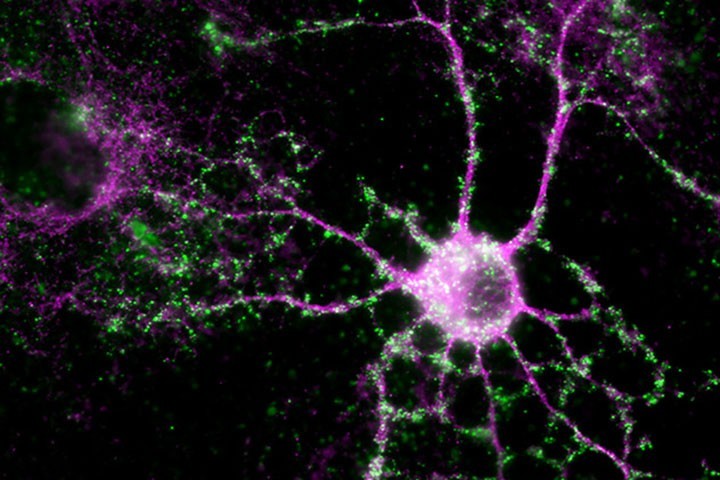 An innovative mouse model to understand the role of ATP receptor P2X4 in Brain diseases as well as in peripheral disorders.

The ATP receptor P2X4 is expressed in many cell types throughout the body, most notably in neurons and glial cells of the brain. This protein, which is expressed at low levels under normal conditions, is overexpressed by certain neurons and /or glial cells in neurodegenerative diseases such as Alzheimer’s disease, Amyotrophic lateral sclerosis , multiple sclerosis, chronic pain and other pathologies like those related to alcohol consumption. Additionally, increased surface P2X4 levels are observed in cells of the periphery during pathology, such as inflammation, asthma or rheumatoid arthritis suggesting that the P2X4 receptor could be a key player in many pathologies and therefore a promising therapeutic target. In order to understand P2X4 receptor functions, Eric Boué-Grabot’s lab, at the institute of Neurodegenerative diseases (IMN) of Bordeaux, developed with the Strasbourg Mouse Clinic a transgenic knock-in mouse model which allows the  increase P2X4 receptors on the surface of certain cells. The results published in the journal Molecular Psychiatry, obtained in collaboration with several French, European and Canadian teams demonstrate that increased levels of P2X4 on the surface of forebrain neurons involved in learning and memory lead to memory deficits and reduced anxiety-like behaviors in knock-in mice. These studies suggest that the increase in P2X4 receptors on the surface of neurons, as observed in Alzheimer’s disease may contribute to memory deficits and more generally may have key role in various neuropsychiatric disorders.

This study furthermore underscores the potential of this new transgenic mouse model in which P2X4mCherryIN fluorescence represents a unique tool to directly monitor increased P2X4 expression in pathological models.  These knock-in mice are an important tool to elucidate the role of P2X4 in different pathologies including brain, lung and heart disorders.

ATP signaling and surface P2X4 receptors are upregulated selectively in neurons and/or glia in various CNS disorders including anxiety, chronic pain, epilepsy, ischemia and neurodegenerative diseases. However, the cell-specific functions of P2X4 in pathological contexts remain elusive. To elucidate P2X4 functions, we created a conditional transgenic knock-in P2X4 mouse line (Floxed P2X4mCherryIN) allowing the Cre activity-dependent genetic swapping of the internalization motif of P2X4 by the fluorescent mCherry protein to prevent constitutive endocytosis of P2X4. By combining molecular, cellular, electrophysiological and behavioral approaches, we characterized two distinct knock-in mouse lines expressing non-internalized P2X4mCherryIN either exclusively in excitatory forebrain neurons or in all cells natively expressing P2X4. The genetic substitution of wild-type P2X4 by non-internalized P2X4mCherryIN in both knock-in mouse models did not alter the sparse distribution and subcellular localization of P2X4 but increased the number of P2X4 receptors at the surface of the targeted cells mimicking the pathological increased surface P2X4 state. Increased surface P2X4 density in the hippocampus of knock-in mice altered LTP and LTD plasticity phenomena at CA1 synapses without affecting basal excitatory transmission. Moreover, these cellular events translated into anxiolytic effects and deficits in spatial memory. Our results show that increased surface density of neuronal P2X4 contributes to synaptic deficits and alterations in anxiety and memory functions consistent with the implication of P2X4 in neuropsychiatric and neurodegenerative disorders. Furthermore, these conditional P2X4mCherryIN knock-in mice will allow exploring the cell-specific roles of P2X4 in various physiological and pathological contexts.