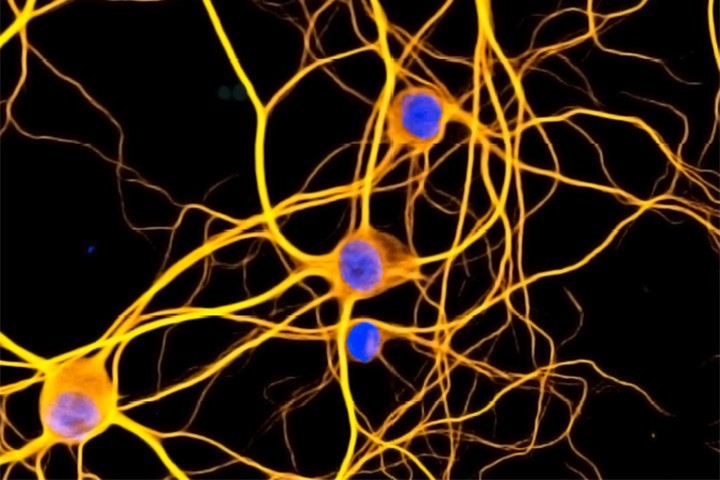 Although a substantial amount of our DNA was initially classified as “junk DNA”, it became more and more apparent that products of these regions can affect organs’ physiology. Human endogenous retroviruses (HERV), found in these “non-coding” genomic regions, embody around 8% of the human genome and are remnants of infections that took place several million years ago in our ancestors’ DNA. These genes are normally silenced but in conditions of infections and some neuropsychiatric disorders HERV proteins can be detected in patients. This raises the question of the role of specific retrovirus proteins in the etiology of various psychiatric illnesses, such as psychotic disorders. In this translational study, neurobiologists (Bordeaux), virologists (Geneva, Grenoble), psychiatrists (Paris), and immunologists (Paris) joined forces to unveil that the HERV-W Envelope (Env) protein, which is present in the circulation of approximately 50% of patients with psychosis, is a potent regulator of the glutamatergic transmission (~80% of the synaptic transmission in the brain). Schematically, HERV Env corrupts the glutamatergic NMDA receptor surface dynamics and organization, the plasticity of glutamatergic synapses, brain cell network activity, and induces psychotic-like behaviors in rodents that express HERV Env. These cellular and behavioural effects were triggered through the release of cytokines from glial cells that induce the deficit in NMDA receptor functions. Remarkably, the developing brain appears to be very sensitive to the Env effect. This study provides thus a biological substrate that link the well-known pathological interplay between gene regulation, inflammation, and in psychosis in the developing brain. This also opens new therapeutical strategies, with an ongoing trial, to fight back the HERV gene products and maintain the glutamatergic synapse in a physiological range.