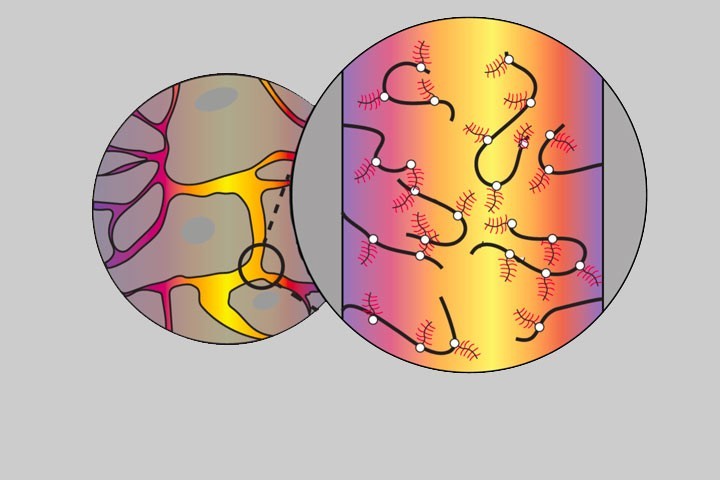 The brain extracellular microenvironment, described 50 years ago, surrounds every cell of the central nervous system. It is composed of a dynamic compartment, the extracellular space, which contains the interstitial fluid and a plastic scaffold known as the extracellular matrix (ECM). The ECM, main structural component of the extracellular space, is a dense network of macromolecules, with the glycan polymer hyaluronan (also known as Hyaluronic Acid) at its core as a gel-like framework. The primary role of ECM is to provide adhesion support, but its role goes well beyond: through its structure, physico-chemical properties and various ligands, the matrix is involved in key cellular functions such as synaptic plasticity or response to injury. It is known that during cancer genesis, the ECM in the human brain undergoes important transformations, resembling embryonic brain cell milieu with a much viscous structure; however, little is known about its involvement in the pathophysiology of neurodegenerative diseases, and in particular Parkinson’s disease.

In a new study published in Nature communications, the teams of Drs. Erwan Bezard and Laurent Cognet show:

Since Santiago Ramon Cajal’s description of a neuron more than 100 years ago, microscopy has played a critical role in understanding the organization of the brain. Recent super-resolution fluorescence microscopy offers up to tenfold improvement in resolution compared to classical optical microscopy and allows scientists to visualize the inner workings of cells and biomolecules at unprecedented image definition.

“Using state-of-the-art technologies developed in Bordeaux by the team of Laurent Cognet together with the team of Laurent Groc, we were able to visualize the precise morphological and diffusional parameters of the extracellular space in a model of synucleinopathy for Parkinson’s disease,” said Erwan Bezard, PhD, of the University of Bordeaux, France. “This may be the key to understanding how proteins such as alpha-synuclein transfer between cells of the brain and periphery. Moreover, the possibility to explore nanoscale organization of the extracellular microenvironment will open new avenues to further understand brain physiology in health and disease.” 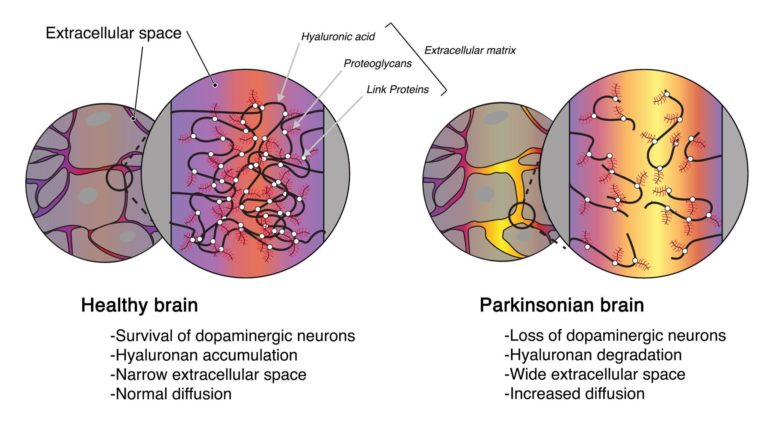