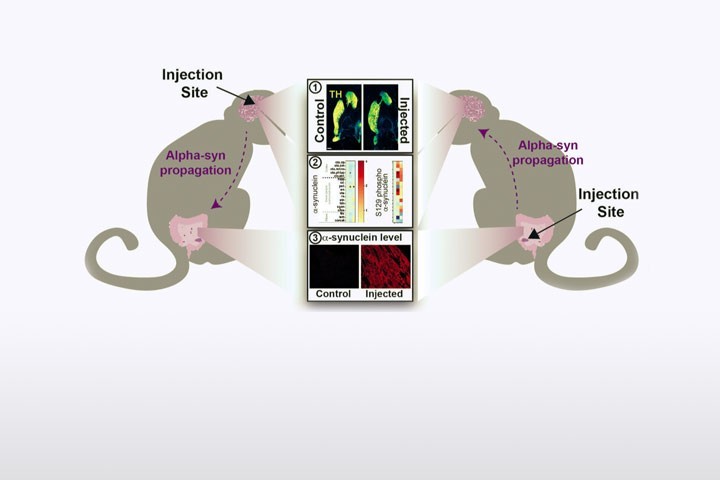 There is growing evidence that Parkinson’s disease (PD) may begin in the gut, with aggregates of the protein alpha-synuclein arising in the gut, playing a key role in the development of the disease. In experiments in non-human primates, a team of spanish and french researchers say they have found additional evidence that brain alpha-synuclein can also travels down to the gut. The study, described in the last issue of the journal Brain, offers a new invaluable primate data exploring the role of the gut-brain axis in the initiation and propagation of PD pathology.

Parkinson’s disease is characterized by the cell death of a specific neuronal population and by the buildup of a misfolded protein, called alpha-synuclein, in the cells of the brain. The research about the gut-brain axis emerged in 2003 when a neuroanatomists team led by Heiko Braak spotted alpha-synuclein inclusions within the enteric nervous system of people who had died with PD. They proposed a staging scheme in which α-synuclein pathology spread from the gut to the brain. However, the intestinal origin of PD has not been proved in nonhuman primates and the bidirectional travel of alpha-synuclein is still under investigation.

“Recent data from our laboratory show that extracted α-synuclein aggregates of brains of dead patients have the ability to initiate and extend the neurodegenerative process that typifies Parkinson’s disease in mice and primates,” explained one of the corresponding author, Benjamin Dehay, PhD, from the Institut des Maladies Neurodégénératives, Bordeaux University, France. “Using the same human aggregates, this study shows that, not only α-synuclein spreads from the gut to the brain, but also travels from the brain to the gut. Understanding the way the disease develops over time should open the door to the development and testing of new therapeutic approaches.”

1- Two years after administration, injected monkeys displayed neurodegeneration regardless of the injection site, in the brain or in the gut.

2- Alpha-synuclein deposits of the pathological form of the protein was observed both in the enteric system and in the brain and as explained by Dr. Dehay: “high α-synuclein level in enteric neurons correlated with the progressive destruction of the nigrostriatal pathway.”

Although further experiments are necessary, the study also suggests that the transmission of α-synuclein pathology does not go through the vagus nerve as it was previously suggested. Instead, “our results suggest a possible systemic mechanism, in which the general circulation would act as a route for long-distance bidirectional transmission of endogenous α-synuclein” explained Dr. Dehay, strengthening the predictive role of alpha-synuclein as a biomarker. 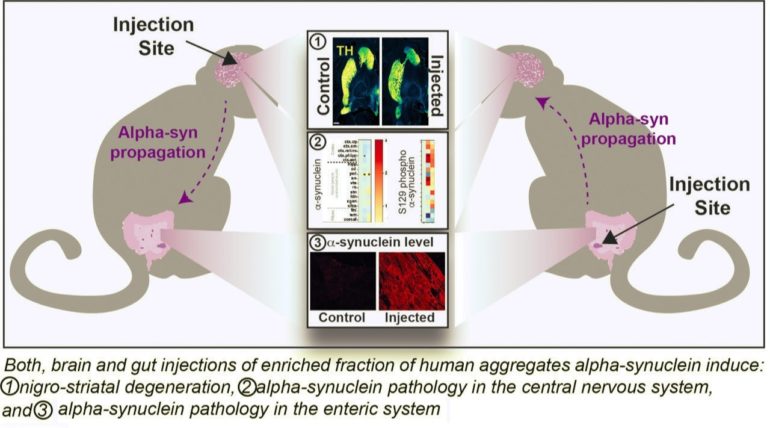