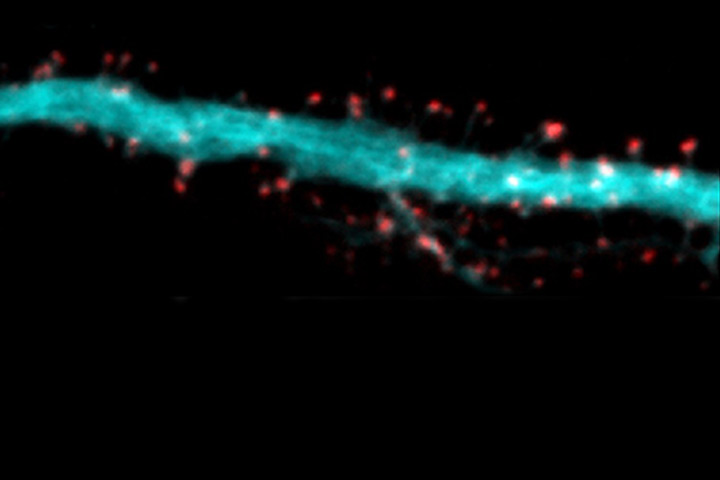 An international team of scientists, including researchers fro IINS, developed a new method and visualized specific receptor proteins in nerve cells that are important for learning. The results were published in the renowned journal Nature Communications.

The research group of Dr. Daniel Choquet, as well as of Prof. Dr. Markus Sauer from the Biocenter and Dr. Gerti Beliu from the Rudolf Virchow Center for Integrative and Translational Bioimaging at the University of Würzburg, developed a new approach that made it possible for the first time to visualize a complex of receptor protein and auxiliary protein in living neurons. “This method opens new doors to the study of hard-to-label proteins in living neurons,” Sauer explains.

Combination of innovative methods and expertise in neuroscience

To visualize the proteins, the scientists combined the super-resolution microscopy method dSTORM developed by Sauer with the labeling method of click chemistry. In this technique, an artificial amino acid, the building blocks of which proteins are composed, is incorporated directly into the protein of interest. A tiny dye binds to this artificial amino acid, like a second piece of a puzzle, and thus directly labels the protein. With this new approach, researchers can now see exactly what is happening in a cell, right down to the molecular level.

“In nerve cells, it is particularly important which protein is located where in the cell and with which other proteins it is connected. Because this molecular organization regulates the signal transduction of the neurons and thus such important processes as learning,” explains Choquet. Conventional labeling methods, such as labeling with antibodies or linking fluorescent proteins, are limited in their use, particularly in living neurons. These methods can disrupt the normal metabolism of the cell due to the size of the labeling molecules. Therefore, it has also been very difficult to study the exact molecular processes and regulation of the individual proteins in living cells.

The AMPA receptor is a protein that has attracted great interest in neuroscience. Among other things, the receptor is important for synaptic transmission. Small auxiliary proteins (TARP) bound to the receptor regulate the activity and the localization of it. It was known from structural biology studies that the receptor and auxiliary protein could form a complex. Although the scientists suspected this protein complex must be present at the synapses, it has not yet been possible to label the proteins and visualize them under the microscope.

Now it is clear: the receptors were literally masked. The binding of the auxiliary proteins to the receptors also covered the binding site for the antibody. Since it could not bind, labeling was not possible and the receptors were thus “invisible”. With the new method, which was optimized especially for neurons, it is now possible to show the protein complex of receptors and auxiliary protein. The high spatial resolution of dSTORM allows the receptors to be counted individually and their distribution in nerve cells to be studied specifically. The research groups are already working on unmasking other proteins to enable their visualization by super-resolution fluorescence imaging.

Diogo Bessa-Neto  is a researcher in. Dr. Daniel Choquet’s group at the Bordeaux Neurocampus department of Bordeaux University

Dr. Gerti Beliu is a group leader at the Rudolf Virchow Center for Integrative and Translational Bioimaging at the University of Würzburg

Prof. Dr. Markus Sauer is chair head of Biotechnology and Biophysics at the Biocenter at the University of Würzburg and member of the executive board of the Rudolf Virchow Center for Integrative and Translational Bioimaging

Dr. Daniel Choquet is heading the team Dynamic Organization and Function of Synapses at the IINS – Bordeaux Neurocampus department of Bordeaux University