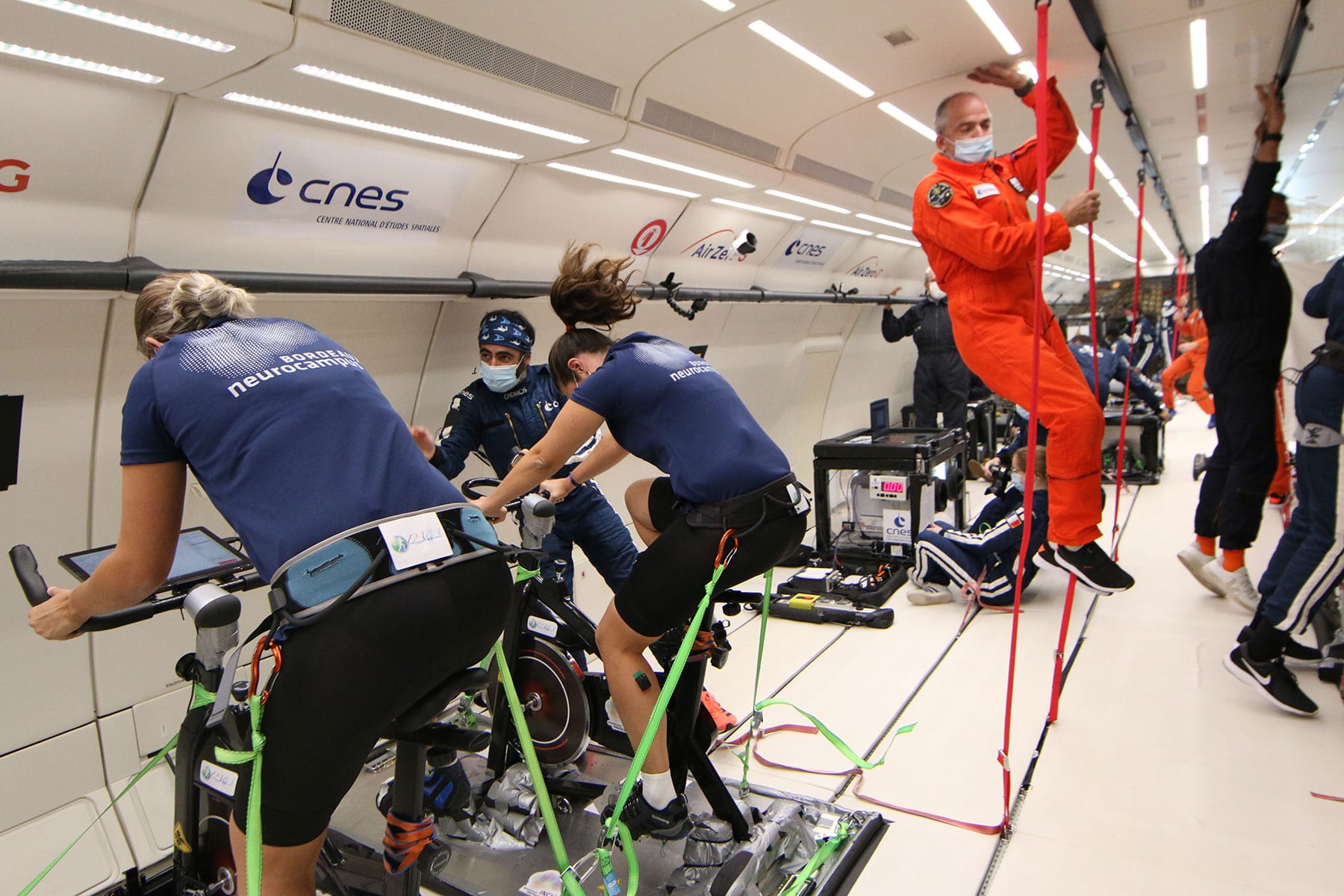 An experiment in parabolic flight for the INCIA

At the end of September 2021, the Coordination and Plasticity of Spinal Generators team of the INCIA (Institute of Cognitive and Integrative Neurosciences of Aquitaine) took part in a new campaign of parabolic flights on board the Zero-G aircraft. This campaign, entirely financed by the CNES (Centre National Etudes Spatiales), was carried out from Mérignac where the premises of Novespace, the CNES subsidiary which charters the plane, are located. Named UPLOAD (Use Of Proprioception In Locomotor Adaptation), this project led by Etienne Guillaud from INCIA was carried out in collaboration with Jean-René Cazalets and Laurent Bouyer from Laval University in Quebec. Its objective is to better understand the role of the different proprioceptive receptors involved in the learning of a motor task.

In order to identify the relative contribution of the different muscle and tendon receptors to calibrate and adapt cyclic and locomotor movements, 12 participants were asked to perform a pedaling task on a cyclo-ergometer on the ground, in normal gravity conditions, and during parabolic flights in modified gravity. Thanks to Emilie Doat from the Plateforme d’Analyse du Mouvement (PAM, INCIA), a device composed of two “apartment bicycles” meeting aeronautical standards made it possible to carry out measurements on 4 participants per flight, 3 days in a row. These two bicycles had the particularity of having a left pedal which was not fixed, but which slid along a vertical rail. The participants had to train the pedal with their right leg, and learn to keep the left foot in the right place at the right time. In microgravity, when the subjects’ bodies were weightless, the proprioceptive receptors detected unusually weak forces, while the position of the legs was correctly perceived. It is by measuring the success of the participants in this task, by comparison between the expected positions and the real positions of the left foot, that the learning capacities were explored in this original context of weightlessness. 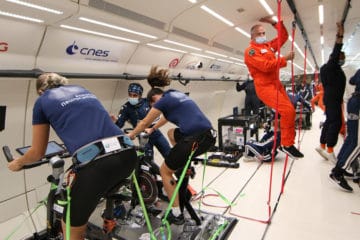 The parabolic flights are performed on board an Airbus A310 for the Air Zero G flights, which follows a flight profile alternating ascending and descending maneuvers spaced by landings. First, the pilot gradually pulls back on the control column and the aircraft pitches up until it reaches an attitude of 47°, at an altitude of about 25,000 ft. During this phase, called “entry resource”, a strong apparent gravity or hypergravity is established: the passengers weigh 1.8 times their weight on Earth. Then the plane starts a vertiginous descent which allows to obtain up to 22 seconds of weightlessness. During each of these seconds, the objects and people on board no longer feel gravity, and can float freely in the aircraft cabin. Then a new phase of hypergravity begins, the plane resumes its trajectory so as to stop its fall and resume a classic flight profile. These different stages will be repeated 31 times per flight, allowing more than half an hour of microgravity per campaign.