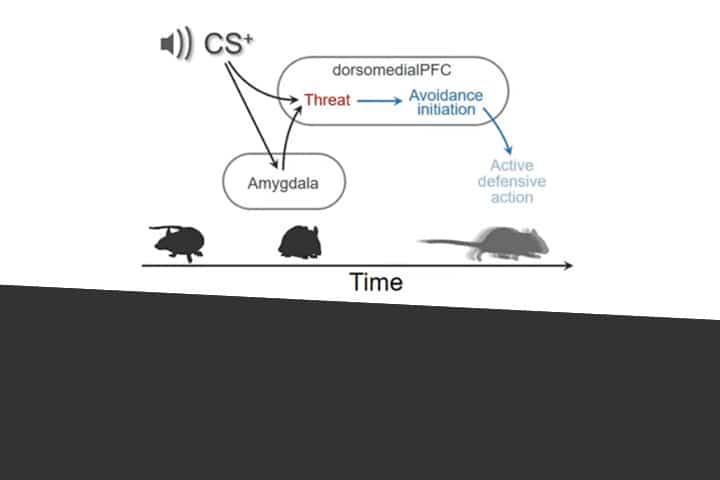 Coping with threatening situations is at the core of mammal’s defensive systems. Defensive behavior is supported by a large network of neuronal structures including the basolateral amygdala (BLA) and dorso-medial prefrontal cortex (dmPFC). One of the main defensive responses when facing a danger is avoidance behavior, which are learned responses that allow an animal to prevent the occurrence of an aversive event. Excessive avoidance in the absence of a real threat is a hallmark of pathological conditions such as anxiety-related disorders. This is why it is important to understand avoidance behavior underlying neuronal mechanisms.

The main concept developed in our study is about how sensory information and avoidance behavior are dynamically encoded in the dmPFC, a structure involved in both goal-directed behavior and emotional regulation. To address these questions, we use a combination of behavioural approaches, in vivo electrophysiology, pharmacology and optogenetics, together with advanced video tracking and machine learning techniques.

We use an active avoidance task, where mice are placed in a maze with 2 symmetric compartments and challenged with 2 auditory stimuli. One, that we call CS+, is associated with an unpleasant shock after 7 seconds. Another sound, that we called CS–, is neutral. In addition, shuttling from the current compartment cancels any ongoing sound and contingent shock, and this defines an avoidance response. Mice learn to discriminate the 2 sounds by selectively avoiding to CS+.

We performed single-unit recordings in the dmPFC and analyzed the data by using artificial intelligence tools. We first observe that, despite the discrete structure of the sound used (sound-pips), neuronal populations in the dmPFC maintain information about the presence of CS+, even during the absence of auditory inputs (in between sound-pips). In contrast, this is not occurring during CS– presentations. When we inactivate the amygdala while recording the dmPFC, we observe that avoidance to CS+ is dramatically impaired. Moreover, although dmPFC neuronal decoders still show information about the presence of the sound-pips, the information about CS+ in between sound-pips is missing, showing that the dmPFC relies on the BLA to construct sustained representations of threats from associated sensory inputs.

While dmPFC strongly represents CS+ at the onset, it does not predict avoidance behaviour. However, right before starting the avoidance running response, dmPFC contains information about the upcoming avoidance action. This, in contrast, is not observed when we consider analogous spontaneous run movements, indicating that the dmPFC neuronal signature we observe before the avoidance run is specific to the impending avoidance action. Finally, to study the causal role of the dmPFC activity in avoidance behaviour we performed time-specific inactivations using optogenetics. When we briefly inactivate the dmPFC at the onset of the CS, we induce a delay in the time in which avoidance responses are performed. Also, when we inactivate the dmPFC after CS onset, we reduce the avoidance response probability. This later result confirms that there is a dynamic process taking place in the dmPFC linking threats with the initiation of defensive actions.

Over the past decades, it has been clear that the BLA plays a key role in threat-related behavior. However, in recent years it has also become evident that the prefrontal cortex regulates threat responses. In this study we show that the BLA is necessary to link the representations of a CS with threat. Moreover, the dmPFC is also necessary to dynamically link this threat representation with defensive actions. Finally, this dynamic process is critical to define the temporal evolution of avoidance behavior.