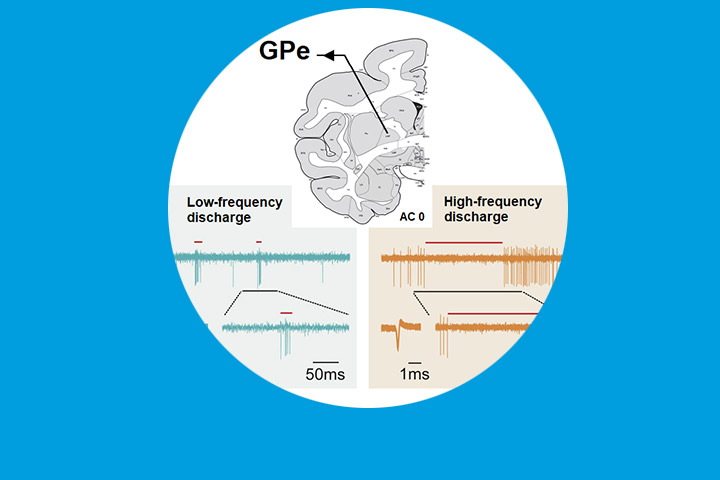 Marc Deffains, CNRS researcher at IMN, published a collaborative study with the Hebrew university : Dichotomous Activity and Function of Neurons with Low- and High-Frequency Discharge in the External Globus Pallidus of Non-Human Primates 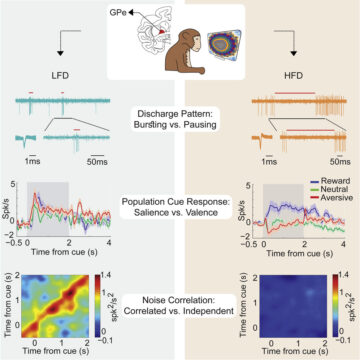 The external globus pallidus (GPe) is a central hub/component of a subcortical neuronal network named basal ganglia (BG) and has a key role in its physiology and pathophysiology. Early in vivo electrophysiological recordings in rodents, non-human primates (NHPs), and humans indicated that GPe neurons could be divided into low- and high-frequency discharges neurons (LFD and HFD neurons). Nevertheless, most studies investigating the contribution of the GPe in BG functions and dysfunctions treat the GPe as a homogeneous neuronal population.

In this study, the authors recorded the activity of the LFD and HFD neurons in the GPe of four NHPs performing a Pavlovian conditioning task with cues predicting reward, neutral and aversive outcomes. Then, they examined their spontaneous and evoked discharge patterns and synchronizations, and discussed the results compared to the rodent GPe neurons. This work resulting from a long-term international collaboration between IMN (Dr. Marc Deffains) and the Hebrew University of Jerusalem (Dr. Shiran Katabi and Prof. Hagai Bergman) is now published in the journal Cell Reports.

First, the authors reported that LFD neurons tend to burst whereas HFD neurons tend to pause, indicating that the burst/pause tendency of the neurons is an additional and relevant feature to discriminate between the two NHP GPe neuron subtypes. LFD and HFD neurons were then found to exhibit distinct response patterns to incentive events, with LFD neurons encoding salience while HFD neurons encoded valence. Finally, a strong and sustained correlated activity between simultaneously recorded LFD neurons was evident, prompting the need to revise the canonical view that all pallidal activity is independent (uncorrelated) in the healthy state. Overall, the current study demonstrates that the dichotomous organization of the NHP GPe extends beyond neuronal discharge properties. LFD and HFD neurons also exhibit a dichotomous function which is most likely critical for implementing standard functions and computations within the neural network of the BG.

Two distinct pallidal neuronal populations exhibiting distinct neurochemical, anatomical connectivity and electrophysiological features have recently been reported in rodent (i.e., arkypallidal and prototypic neurons). While the present study suggests similarities in rate and pattern discharge between NHP GPe LFD and HFD neurons and rodent arkypallidal and prototypic neurons, further work is required to conclude on a possible homology between these neuronal populations.

* Authors contributed equally to the work