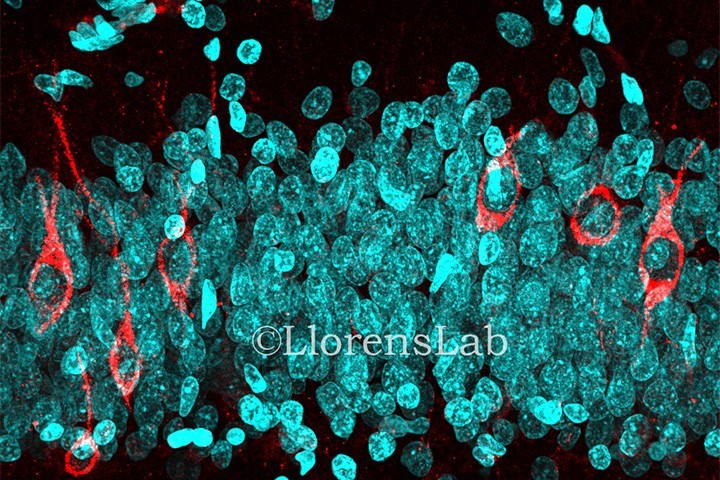 Adult hippocampal neurogenesis (AHN) is a phenomenon characterized by the generation and addition of newborn dentate granule cells to the pre-existing dentate gyrus network of the hippocampal formation. It was first described in humans by Erkisson et al., 1998, further alleviating the dogma formulated by Ramón y Cajal stipulating that brains were fixed and immutable, a dogma already challenged by Altman whom described neurogenesis in many species. Since then, numerous studies have observed and confirmed the occurrence of AHN in adult humans (Knoth, 2010; Spalding, 2013; Cipriani, 2018; …). However, a recent study published by Sorrells et al. has challenged this idea, as they failed to label young immature neurons in the adult human hippocampus and showed a marked decrease in neurogenesis during childhood (Sorrells, 2018). However, just a few weeks later, Boldrini et al., 2018 came with a complete opposite conclusion; namely that AHN persists throughout adulthood in human brains. The publication of these two studies has reignited the discussion about whether or not adult neurogenesis exists in the human hippocampus (Kempermann et al., 2018) and have notably brought to light the need to develop better methods for brain samples processing. Indeed, in Sorells’ paper no data about the subjects’ medical records were given; neither about previous neuropathologies nor about their lifestyles that could have somehow influenced neurogenesis, as it is known in other mammals to be greatly impacted by extrinsic influences such as depression, anxiety or activity (Sahay and Hen, 2007; Van Praag et al., 1999). The post mortem delay (PMD) before tissue fixation is also critical for the study of AHN in human, in their study, the PMD was up to 48h, a time-lapse during which proteins could undergo degradation (Boekhoorn et al., 2006), and so could partly explain the failure to detect in human brains the doublecortine protein (DCX), a marker of immature dentate granule neurons. Finally, the duration of tissue fixation is another important parameter that needs to be taken into account as improper fixation duration could result in antigen masking and therefore prevent antibodies recognition. On the contrary, the paper of Boldrini was descriptive about past neuropathologies and lifestyles of their subjects and PDMs did not exceed 26h.

Here is how the paper published in March 2019 (Moreno-Jiménez et al., 2019) stepped in, affirming that adult hippocampal neurogenesis is abundant in neurologically healthy subjects. To lend weight to their assertion, they applied what they describe as a state-of-the-art tissue processing method. For the thirteen subjects studied, medical records were deeply analyzed in order to remove any biased patient due to neurological diseases or cognitive disability. The PMD of fixation was comprised between 3 to 23 hours for 12 of their patients, and only one had a PMD up to 28 hours. The fixation time was optimized and limited to 24 hours and freezing, paraffin inclusion or any mechanical tissue alteration were avoided. Stereology was applied for cell quantification, which is a reliable 3D interpretation of 2D cross-sections allowing randomized and unbiased quantitative analysis. To detect newly generated dentate granule neurons, the DCX marker was used as it is the most reliable in rodents. They were not able to detect any DCX+ cells in non-neurogenic regions such as the entorhinal cortex or the Cornu Ammonis. However, thousands of DCX+ cells were labelled in the dentate gyrus, validating the presence of immature neurons in this region, therefore confirming that adult hippocampal neurogenesis in human is a reality. This result was confirmed by the use of three other DCX antibodies targeting other parts of the protein. They also succeeded in characterizing the different dynamics of the newborn cell population with the use of different markers for the several differentiation stages of newborn dentate granule cells. They further confirmed this analysis by distinguishing between two differentiated stages of DCX+ cells thanks to their location and morphology. Less differentiated cells were located closer to the sub-granular zone, whereas more differentiated cells were located deeper within the granule cell layer and displayed morphological characteristics related to more mature granule neurons.

Persuasive protocol controls were performed to emphasize their results. Concerning the fixation time, they showed that brain blocks kept in 4% paraformaldehyde between 2 to 12 hours had a higher detection of DCX+ cells, but that if the fixation time exceeded this period, detection dropped sharply, probably explaining the results of Sorrels with long fixation times. However, by performing sodium borohydride incubation and antigen retrieval processing on the sample, the detection of DCX was rescued in brain samples for a fixation time up to 48 hours. Immunohistochemistry is a difficult method requiring a perfect control of each step necessary for tissue preparation. In this paper, with a mastered protocol and a high number of sample controls, they were able to label young immature neurons until old age, such as 87 years old.

In addition to these major results, they further emphasized their findings by showing that adult neurogenesis drops sharply in patients with Alzheimer’s disease. Based on the study of 45 patients suffering from Alzheimer’s disease with different degrees of severity (Braak stages from stage I to VI in terms of severity), they detected a sharp decrease of the number of DCX+ cells compared to control subjects. Based on the use of differentiation markers, they were able to show that the maturation of newborn dentate granule cells is impaired starting at the early development of the disease, preventing them from reaching their full maturation state, therefore decreasing the number of mature neurons in the dentate gyrus. Even though the total number of DCX+ cells does decrease in healthy neurological subjects with age, the decrease observed in Alzheimer’s disease is consistently greater, suggesting an independent neuropathological mechanism, which represents some hope in terms of therapies to counteract the progression of the disease and some of the symptoms.

To conclude, using mastered precise tissue processing methods, the debate over adult human neurogenesis was put to an end, as thousands of immature young neurons with different dynamics of maturation were labelled in the human dentate gyrus at all ages in both physiological and pathological conditions. However, in pathological condition such as Alzheimer’s disease, this phenomenon of adult human neurogenesis is impaired starting at the early development of the disease.