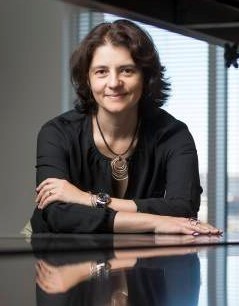 Suzana Herculano-Houzel is a Brazilian-born neuroscientist and associate professor at Vanderbilt University, where she studies what different brains are made of, what changes (or doesn’t change) with different brain sizes, how much energy they cost, and what difference does all that make – especially in the context of how human brains compare to others. She has a TED talk on what makes the human brain special (if anything), and recently published a trade book, The Human Advantage, telling the back story to her research on human and elephant brains – and how cooking allowed us into existence.

She is also the author of a biweekly column on the neuroscience of everyday life for Folha de São Paulo, the major newspaper in Brazil. Going on to its 11th year, the column has featured over 270 appearances since 2006. Suzana is also the author of six other books (in Portuguese) on the neuroscience of everyday life, including Our Daily Brain, Sex, Drugs, Rock’n’Roll… and Chocolate, Why is Yawning Catching? and Drops of Neuroscience for a Better Life.

She lives in Nashville, TN, with her husband, son and two dogs.

– Mota B and Herculano-Houzel S (2015) Cortical folding scales universally with cortical surface area and thickness, not number of neurons. Science 349, 74-77.

– Herculano-Houzel S (2015) Decreasing sleep requirement with increasing numbers of neurons as a driver for bigger brains and bodies in mammalian evolution. Proc Royal Soc B 282, 20151853.

–  Herculano-Houzel S, Catania K, Manger PR, Kaas JH (2015) Mammalian brains are made of these: A dataset on the numbers and densities of neuronal and non-neuronal cells in the brain of glires, primates, scandentia, eulipotyphlans, afrotherians and artiodactyls, and their relationship with body mass. Brain Behav Evol, in press