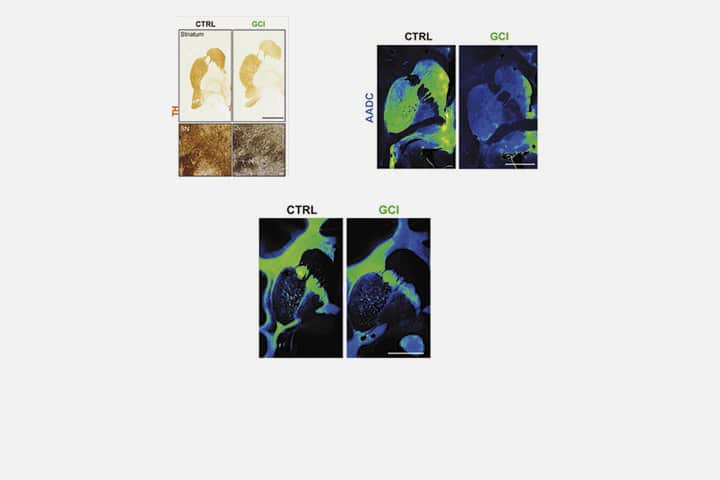 Glial cytoplasmic inclusions (GCI) are the pathological hallmark of multiple system atrophy (MSA). A study published in Brain journal shows that α-synuclein species contained in MSA-derived GCI are pathogenic and have the capacity to induce an MSA-like pathological process in non-human primates two years after GCI injection, including neurodegeneration, as well as loss of oligodendrocytes leading to demyelination and inflammation and a widespread synucleinopathy. The findings pave the way for a new experimental model for MSA research and therapeutic developmen

Synucleinopathies encompass several neurodegenerative diseases, including Parkinson’s disease, dementia with Lewy bodies, and multiple system atrophy (MSA). These diseases are characterized by the deposition of α-synuclein aggregates in intracellular inclusions in neurons and glial cells. Unlike Parkinson’s disease and dementia with Lewy bodies, where the aggregates are predominantly neuronal, MSA is associated with cytoplasmic inclusions of α-synuclein in oligodendrocytes. Glial cytoplasmic inclusions are the pathological marker of MSA and are associated with neuroinflammation, modest demyelination, and ultimately neurodegeneration. MSA is a rapidly progressive and fatal neurodegenerative disease. Currently, patients receive only symptomatic and palliative therapies, as there is no disease-modifying or curative treatment. In addition, there are few animal models of MSA and studies on its pathogenesis are more scarce compared to studies on the pathogenesis of other synucleinopathies, such as Parkinson’s disease and dementia with Lewy bodies. Furthermore, the reason why these cells degenerate is not understood and is still under investigation. One of the ways that researchers are addressing this question is through the use of a variety of animal models.

The development of an animal model that induces most of the specific aspects of the neuropathological features of MSA has been much sought after, but difficult to achieve. Scientists show that injecting human brain extracts of glial cytoplasmic inclusion (from donated postmortem tissue) into the brains of nonhuman primates reproduces the pathophysiology of MSA.

The scientists reproduced three major aspects of this pathology in this new animal model: a loss of nigral dopaminergic neurons, a loss of striatal medium spiny neurons and a loss of oligodendrocytes. They show that intracerebral injections of glial cytoplasmic inclusion induce most of the disease-specific aspects of the neuropathological features of MSA. Two years after intracerebral injections, baboons showed subtle behavioral and neuropathological changes, just as seen in a human brain with MSA.

This study provides the basis for a new way to model and explain how glial cytoplasmic inclusions induce the pathophysiology of MSA. Although further experiments are needed, this new animal model could be used to test new therapies on several pathologies in a more “realistic” context.