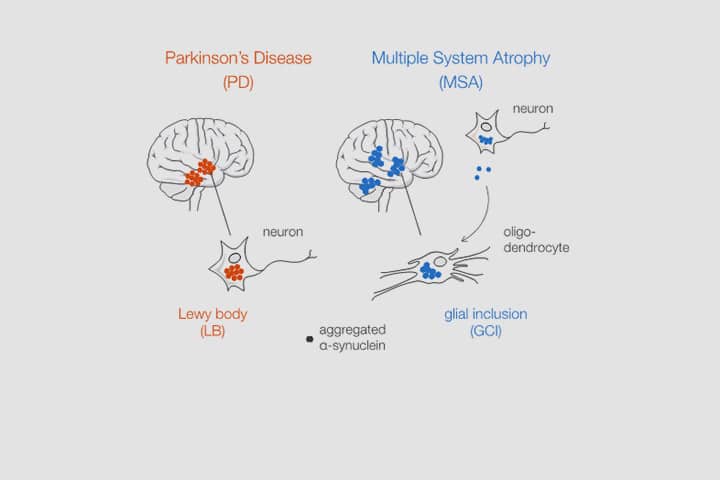 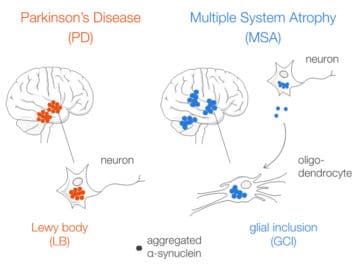 Aggregated alpha-synuclein (α-syn) is a principal constituent of Lewy bodies (LBs) and glial cytoplasmic inclusions (GCIs) observed respectively inside neurons in Parkinson’s disease (PD) and oligodendrocytes in multiple system atrophy (MSA). Yet, the cellular origin, the pathophysiological role, and the mechanism of formation of these inclusions bodies (IBs) remain to be elucidated. It has recently been proposed that α-syn IBs eventually cause the demise of the host cell by virtue of the cumulative sequestration of partner proteins and organelles. In particular, the hypothesis of a local cross-seeding of other fibrillization-prone proteins like tau or TDP-43 has also been put forward. We submitted sarkosyl-insoluble extracts of post-mortem brain tissue from PD, MSA and control subjects to a comparative proteomic analysis to address these points. Our studies indicate that: i) α-syn is by far the most enriched protein in PD and MSA extracts compared to controls; ii) PD and MSA extracts share a striking overlap of their sarkosyl-insoluble proteomes, consisting of a vast majority of mitochondrial and neuronal synaptic proteins, and (iii) other fibrillization-prone protein candidates possibly cross-seeded by α-syn are neither found in PD nor MSA extracts. Thus, our results (i) support the idea that pre-assembled building blocks originating in neurons serve to the formation of GCIs in MSA, (ii) show no sign of amyloid cross-seeding in either synucleinopathy, and (iii) point to the sequestration of mitochondria and of neuronal synaptic components in both LBs and GCIs. 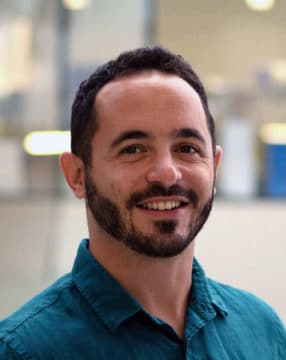 Florent Laferrière has just been recruited in 2021 as a CNRS research fellow in Erwan Bézard’s Physiopathology of proteinopathies team, where he was a post-doc. His research consists of characterising the structure and pathogenic aspects of alpha-synuclein aggregates involved in various neurodegenerative diseases such as Parkinson’s disease or multisystem atrophy. 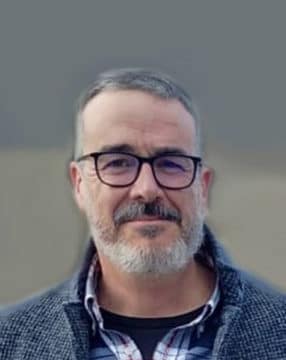