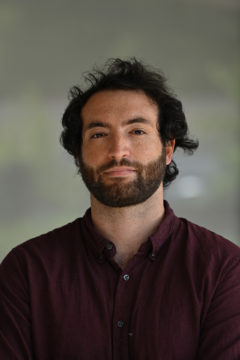 Parkinson’s disease, which affects more than 7 million people worldwide, is caused by the progressive loss of dopamine neurons in the midbrain. In addition to the characteristic motor symptoms of the disease, Parkinson’s patients also have difficulty performing complex movements requiring motor learning. The primary motor cortex (M1) is crucial for this learning, and its activity is altered in parkinsonian patients. The objective of this project was to study the targets and the mechanism of action of dopamine in M1 during motor learning. We first demonstrated that parvalbumin (PV) neurons are the major neuronal population expressing D2-like dopamine receptors in layer 5 of M1 in mice. Activation of these receptors was able to increase the excitability and synaptic transmission of PV neurons on its target cells. We then showed that learning a new fine motor task induced a decrease in excitability and synaptic transmission of PV neurons. Moreover, specific dopaminergic depletion in M1 prevented fine motor learning and also altered the excitability of PV neurons. These dopamine-depleted mice also showed impaired short-term plasticity of their synaptic transmission to pyramidal cells. These data show that PV neurons in M1 layer 5 undergo dopamine-dependent plasticity when learning a new fine motor task. We next focused on a feature of cortical PV neurons, the perineuronal nets (PNN). These PNN are part of the extracellular matrix and form a mesh-like structure that wraps the soma and proximal dendrites of neurons, mainly PV neurons in M1. These PNN are known to act as an inhibitor of cortical plasticity and that their depletion creates a new plasticity window. Our results showed that PNN are reduced in M1 during motor learning, opening a new plasticity window. We also showed that the decrease in excitability of PV neurons in M1 was sufficient to induce a decrease in PNN. Finally, using in vivo calcium imaging we observed the impact of the dopaminergic lesion at a larger scale, showing that the activity of M1 pyramidal cells during motor learning is decreased. This project allowed us to better understand the role of dopamine modulation of M1 circuitry, highlighting PV as a target for cortical dopamine and thus a potential source of dysfunction in M1 pathophysiology.