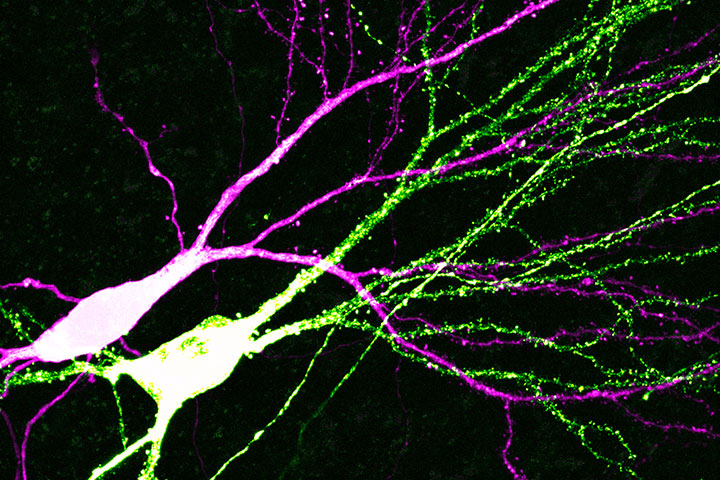 Adapting and staying stable: how neurons modify their connections without compromising their functional integrity

A study conducted under the direction of Mathieu Letellier at the IINS, in the team of Olivier Thoumine and in collaboration with Alexandre Favereaux, reveals a molecular mechanism for homeostatic plasticity in which individual neuronal connections, the “synapses”, compensate for prolonged decrease in neuronal activity by increasing the number of glutamate receptors. This study is published in the EMBO Journal.

Homeostatic synaptic plasticity is a process by which neurons adjust their synaptic strength to compensate for prolonged perturbations of neuronal activity. Whether the highly diverse synapses on a neuron respond uniformly to the same perturbation remains unclear. Moreover, the molecular determinants that underlie synapse-specific homeostatic synaptic plasticity are unknown. In this study, we report a synaptic tagging mechanism in which the ability of individual synapses to increase their strength in response to activity deprivation depends on the local expression of the spine-apparatus protein synaptopodin under the regulation of miR-124. Using genetic manipulations to alter synaptopodin expression or regulation by miR-124, we show that synaptopodin behaves as a “postsynaptic tag” whose translation is derepressed in a subpopulation of synapses and allows for nonuniform homeostatic strengthening and synaptic AMPA receptor stabilization. By genetically silencing individual connections in pairs of neurons, we demonstrate that this process operates in an input-specific manner. Overall, our study shifts the current view that homeostatic synaptic plasticity affects all synapses uniformly to a more complex paradigm where the ability of individual synapses to undergo homeostatic changes depends on their own functional and biochemical state, a feature that is surprisingly shared with Hebbian plasticity.