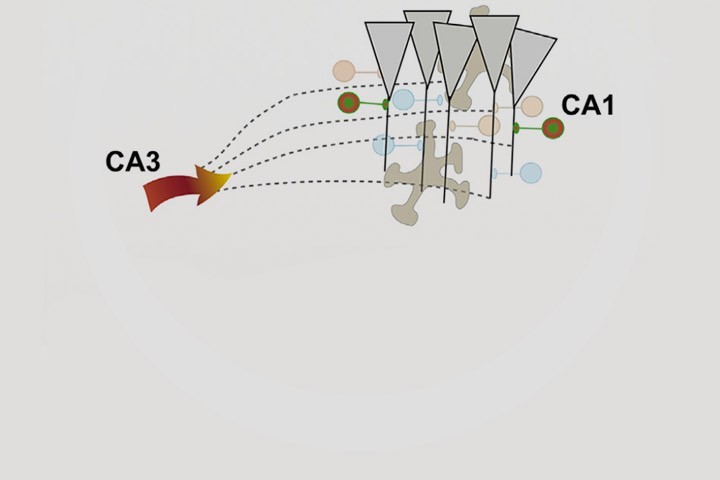 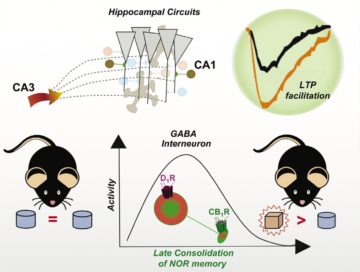 The impact of dopamine on memory processes are known since long time, but how this neurotransmitter is engaged to modulate hippocampal circuits is still a matter of discussion. The present study shows that not only dopamine release is necessary for memory formation and/or consolidation, but that its signaling must be tightly and precisely regulated, specifically by the activation of cannabinoid receptor type-1 (CB1) receptors in specific hippocampal GABAergich cells expressing the dopamine receptor type 1 (D1R). Thus, the present study reveals that a specific subpopulation of hippocampal  interneurons co-expressing the CB1R and D1R controls late consolidation of novel object  recognition (NOR) memory and associated synaptic plasticity. Specifically, CB1R expressed in D1R-positive interneurons participate in learning-induced facilitation of in vivo Long-term potentiation (LTP) and are required for consolidation of NOR memory. Moreover, CB1R in D1R-positive neurons are necessary for physiological D1R-dependent modulation of memory processes, suggesting that cannabinoid signaling is part of a complex modulatory circuit regulated by dopamine transmission in the hippocampus. By determining cellular and behavioral functions of a specific CB1R-expressing interneuron subpopulation, these data uncover an unforeseen role of CB1R in the D1R-dependent control of long-term memory.

These results are interesting for two main reasons. On one hand, they show that even low abundant specific subpopulations of neurons can modulate complex behaviors within the hippocampus. In other words, small cell subpopulations can play key roles in memory consolidation. On the other hand, by characterizing a chain of events that properly modulates hippocampal circuits to provide the synaptic plasticity associated to memory consolidation, they provide a mechanism explaining the impact of dopaminergic signaling in hippocampal memory.